Arman Babajanyan, who left Bright Armenia faction, will continue to  work as an independent MP 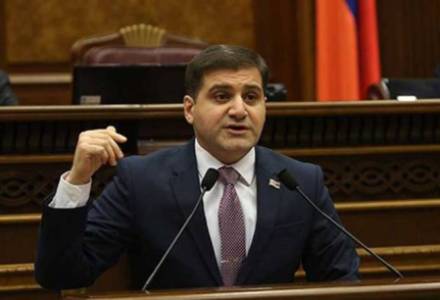 ArmInfo. "The last few days were  perhaps the most difficult days of my life, because I had to make too  complicated decisions," MP of the National Assembly Arman Babajanyan  stated in the Armenian parliament on September 10, who announced the  day before leaving the "Lusavor Hayastan" faction (Bright Armenia) )  It is noteworthy that the MP approached the tribune of the National  Assembly with a backpack.

<This was the most difficult decision, because I had to leave my very  native team, with which I participated in the election several months  ago, walked a difficult path, overcame many challenges. However, this  decision was inevitable>, he noted. According to the MP, the decision  to withdraw from the BA faction is not connected with the faction,  but with the political system.

Unfortunately, I have not seen and do not see this new policy either  in "Bright Armenia" or in other parliamentary forces. With pain I  must state what manifestations of the affected political system are  in the parliamentary factions to my right, and to my left, and in the  center. The consequence of this defeat is that after 1.5 years after  the revolution we have such unresolved crisis situations as we see in  the Constitutional Court, we have the same difficult crisis in the  Amulsar issue, the inferior situation related to constitutional and  judicial reforms, transitional justice, etc.>, he believes.

Arman Babajanyan emphasized that in a broad sense, Armenia has a  parliament, which, to put it mildly, is not equivalent to the  challenges and problems facing the state and society. <With pain I  must state that this syndrome of disproportion refers not only to  domestic, but also to foreign policy. 1.5 years after the revolution,  we see the toothless, inert foreign policy of Armenia, which has  nothing to do with the ideas underlying the revolution>, he stressed.   <By the Velvet Revolution, we, fortunately, created a democratic  state, however, unfortunately, we continue to pursue the foreign  policy pursued by the previous authoritarian government. Over the  past 1.5 years, we have not heard programs, theses, ideas about the  need to transform our foreign policy in this room, we continued the  previous inertia in the case when a democratized, transformed Armenia  had to communicate with the world, speak a different language, with  new agendas and initiatives.  This collective imbalance is a reality  from which it is necessary not to run away, but to look for other  ways to overcome it. These paths exist both in parliament and outside  parliament. There are many healthy units and personalities who are  concerned about the continuation of the historical opportunity laid  down in our country last year,> Babajanyan said in a statement.

The MP in his speech noted that he would not give up the deputy's  mandate and would continue his activities as an independent MP. <I  will continue to do my best as an independent MP to unite forces and  individuals with this holy goal and ensure their potential for the  benefit of Armenia and Armenian statehood, serving the Armenian  people> .