Armenian Foreign Minister promises that Pashinyan-Trump meeting will  take place, but does not voice the dates 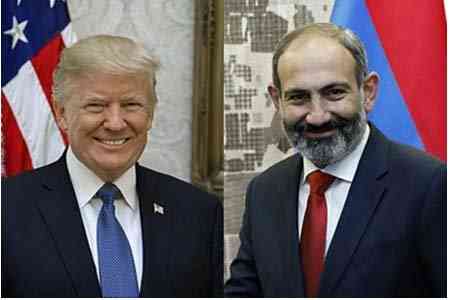 ArmInfo. The delegation, headed by the Prime Minister of Armenia, Nikol Pashinyan, will take part in the regular session of the General Assembly, which will start on September 17 in New York. Armenian Foreign Minister Zohrab  Mnatsakanyan stated this at a press conference in Yerevan on  September 6.

According to the minister, in addition to participating in the work  of the UN General Assembly in New York, Pashinyan will also visit  California, there is already an agenda for the visit. "Naturally,  Armenia is trying to maximize the use of the venue of the UN General  Assembly meeting to advance its foreign policy interests. There will  be a statement by the Prime Minister of Armenia at the GA meeting, it  is also planned to participate in a number of events on the sidelines  of the session. Bilateral meetings are also on the agenda," the  Armenian Foreign Minister said, adding that he perfectly understands  that journalists are interested in whether Pashinyan will meet with  US President Donald Trump and assured that this issue is on the  agenda and is being worked out.

At the same time, the chief diplomat of Armenia assured that the  Armenian-American meetings are at a high level. "There is no lack of  high-level meetings. Moreover, there is an active dialogue, and there  are no restrictions in terms of interaction. The Pashinyan-Trump  meeting will take place, the timing is difficult to specify, but we  are working in this direction, "Mnatsakanyan summed up.