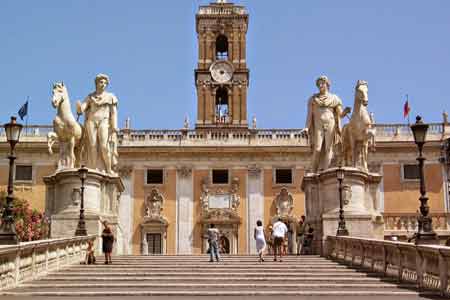 ArmInfo. Starting from today, for the first time, an exclusive exhibition will be held at  the Presidential Residence of Armenia on Baghramyan 26, which  displays the exhibits of one of the oldest museums in the world -  several samples of the mosaic of the Capitoline Museum.

In turn, the Italian Ambassador to Armenia Vincenzo Del Monaco  expressed gratitude to Armen Sarkissian for providing this  opportunity, noted that joint efforts are aimed at stimulating the  bilateral agenda, especially in the fields of culture and art.  "Culture is a very powerful factor in our bilateral relations,  culture is a common feature of Armenia and Italy, culture is in our  genes," the Italian Ambassador said.

The Capitoline Museum (Italian: Musei Capitolini) is the oldest  public museum in the world, which was set up by Pope Sixtus IV in  1471, donating to the people of Rome a collection of antique bronze,  which had previously been placed under the walls of Lateran. The  three main buildings of the Capitoline Museums are: Palazzo  Senatorio, built in the 12th century and modified according to  Michelangelo's designs, Palazzo dei Conservatori, built in the  mid-16th century and redesigned by Michelangelo with the first use of  the giant order column design; and Palazzo Nuovo, built in the 17th  century with an identical exterior design to the Palazzo dei  Conservatori, which it faces across the palazzo. In addition, the  16th century Palazzo Caffarelli-Clementino, located off the piazza  adjacent to the Palazzo dei Conservatori, was added to the museum  complex in the early 20th century.

Three units exhibited at the residence of the President of Armenia  were discovered in Rome in the 19th and 20th centuries, when the city  was rebuilt into the capital. An exhibition of ancient Roman mosaics  for guests of the Presidential Palace will be open until the end of  September.