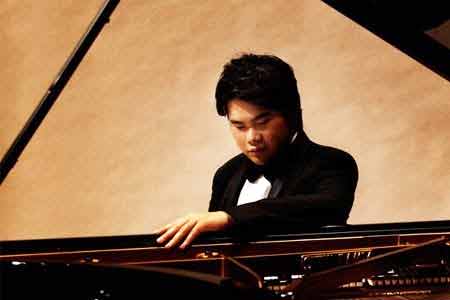 ArmInfo. The 20th anniversary international music festival "Yerevan Prospects" will be  marked by a concert by the blind, outstanding Japanese pianist and  composer Nobuyuki Tsujii, who received a gold medal at the  International Piano Competition named after Van Cliburn in Texas in  2009.

The concert will take place on September 6 at 7:30pm in the Concert  Hall named after Aram Khachaturian, during which the pianist will  perform works by Claude Debussy, Maurice Ravel and Frederic Chopin.   ''I am glad to be in Armenia. Frankly, when I received the invitation  I knew nothing about your country.  But upon arrival, I felt that the  city was wonderful, people are very warm and freindly, wonderful  feelings overwhelm me, and I want to express my gratitude to you by  presenting good music at the concert'', the pianist said during a  September 5 press conference. For the Yerevan concert, the musician  chose the works of French composers, since the music of French  classics is the closest for him. Continuing what was said, he  emphasized that, of course, Frederic Chopin was not a Frenchman, but  he lived there for many years. "I really want to give all my strength  at every concert, and even to those who don't listen to classical  music to show what classical music really is, to discover its beauty  for everyone," the musician said.  Remembering his way on becoming  a  pianist, Nobuyuki Tsujii said that he began playing the piano from  the age of 4. And it all started with a toy piano on which his mother  played for him. "At first, I just played, and then, listening to  music, I began to play myself and fell in love with the music," he  said. It is noteworthy that today Nobuyuki Tsujii does not study  works by notes printed in Braille, but reproduces them after  listening.  Once an American pianist Van Cliburn said about Nobuyuki  Tsujii's performance: "His performance has a health-promoting effect  there is something divine in it". Russian conductor Valery Gergiev  noted that Nobuyuki Tsujii is not only a great musician and star, but  also proof that human capabilities have no limits.  It should be  noted that the music festival "Yerevan Prospects" is held with the  support of the "My Step" Charitable Foundation.