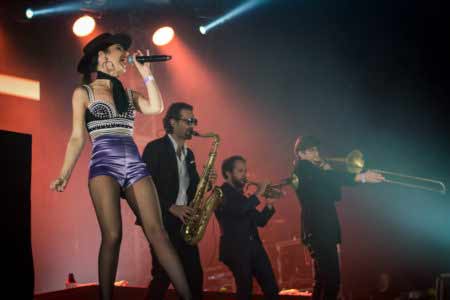 ArmInfo.The world-famous Austrian band Parov Stelar will perform for the first time with a concert in Armenia, which will be held on November 8 at 18:00 at  Hrazdan stadium. The concert will be held within the framework of a  joint initiative of the My Step Charitable Foundation and the  international organization Cultural Tourism Development Association>  Silk Note Festival. The proceeds from the concert will be used to  reconstruct cultural centers in the regions of Armenia.

At the Yerevan concert, both the band's well-known hits of the group  and new works will be heard. The concert will be accompanied by  unique lighting and visual effects, as well as exclusive sound  equipment that has no analogues in the region. The staff serving the  concert equipment will specially arrive in Armenia from European  countries.

Note that the Parov Stelar and The Parov Stelar Band are projects  created by Marcus Fureder, who is called the founder of the  electro-swing music genre and one of the most successful performers  in Austria at the international level. The group consists of 7  people: vocals - Elena Karafisi, Anduze; wind section - Sebastian  Grimus (saxophone), Mark Osterer (trumpet), Jackie Mayr (trombone);  percussion section - Michael Wittner (guitar / bass), Willy Larsson  Jr. (drums). Parov Stelar Band is in great demand all over the world,  and their tracks are soundtracks for numerous films, TV shows and  commercials.  Parov Stelar received 8 Amadeus Austrian Music Awards:  5 times for the best electronic / dance music, 2 times for the best  LIVE concert, and 1 for the best album, and also received 4 gold and  1 double platinum award.

The band has performed over 1,000 live concerts around the world,  such as at the PlayStation Theater in New York, at Alexandra Palace  in London, at Zenith in Paris and at most arenas throughout Europe.  They played at many major festivals such as Coachella, Glastonbury,  Sziget, Lollapalooza, Pukkelpop and many others, and also performed  all over the world, for example, in Australia / New Zealand, America,  Russia, India, Singapore and South Korea.