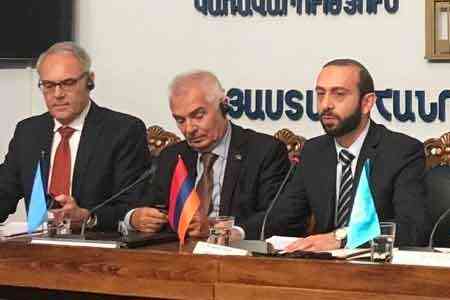 ArmInfo. On August 23, President of the National Assembly of RA Ararat Mirzoyan received the head of the EU delegation to Armenia, Ambassador Piotr Switalski, who is  completing his diplomatic mission in our country.

According to the press service of the parliament, Mirzoyan noted that  Switalski in the course of his activities proved that he is a real  friend of Armenia. The speaker added that he was very pleased to work  with Switalski.

In his turn, the Ambassador noted that it was an honor for him to  work in Armenia during this important period for the country, and  noted that significant progress has been made in Armenia-EU relations  in the past two years, emphasizing the role of the Comprehensive and  Enhanced Partnership Agreement (CEPA) , as well as a reform program  in Armenia.

At the end of the meeting, the Speaker of the National Assembly  confirmed that the EU is an important partner for Armenia, and "we  must constantly make efforts for the final ratification of CEPA,  moreover, we must also record new successes in other areas of  cooperation".