Pashinyan assures: Amulsar does not pose threat neither to Lake Sevan nor to Jermuk springs 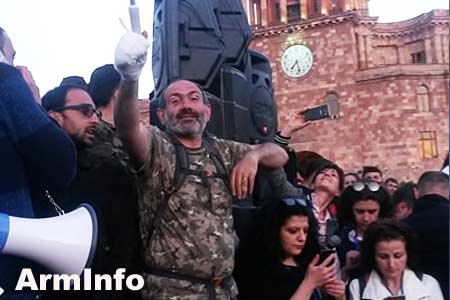 ArmInfo. The decision on the Amulsar deposit will be made solely considering one fact-whether it harms the mineral springs of Jermuk and the waters of Sevan or not. On August 19, Prime Minister of Armenia NikolPashinyan stated this live on Facebook.

However, he assured that these conditions were set from the moment he took the power. The Prime Minister of Armenia, gradually reminded of all his statements on Amulsar since June 25, 2018, in all of which he stated that the RA government will conduct an objective investigation regarding the appropriateness of further development of the field.

Pashinyan recalled that the Armenian executive body is not limited in its actions regarding the issue of making decisions on this issue, and he is not in collusion or deal with any business or with anyone at all. He recalled that a criminal case was opened on the issue of exploiting the field, based on one of the letters addressed to him. The Investigative Committee collected and studied all the available materials on Amulsar, moreover, by decision of the government, the international organization conducted an independent, complete and comprehensive study on the feasibility of exploiting the field.

He recalled that a tender had been announced and a company was selected to carry out the study. Pashinyan noted that the tender was won by two companies working in this field and the choice fell not on the one that is cheaper, but which has high prestige in the international arena, and which is trusted all over the world.

“ELARD conducted an independent study and the results are already known. Based on them, at a previous government meeting, the head of the RA IC made a statement, which emphasized that the operation of Amulsar is not harmful to Sevan, that is, its impact on our lake from an environmental point of view will be negligible, "the head of the Armenian government said, assuring that that significantly more damage is caused from the activities of people on the coast of Sevanthan the field can have in case of force majeure. Pashinyan also noted that according to the study, the field will also not affect the mineral waters in Jermuk.

The third point, which was also a precondition, according to the prime minister, is that the threats and risks for the Vorotan and Arpa rivers during the operation of Amulsar are manageable. “What does it mean that risks are manageable?” That is, if 10 units of contaminated water are to be drained into the river, 2 or 3 units will be flushed instead - this can be called risk management: No, I want to tell you that the government has set a different level for risk management. The condition is that not a drop of contaminated water gets into the environment, ”the head of government said.

He also stated that in the analysis of ELARD there are a number of complaints against Lydian Armenia regarding environmental pollution. “You may ask that given that there are a number of complaints, how did it turn out that a positive conclusion was given about the operation of the field? The fact is that the respondent company gives clarification on each issue on the issues that have arisen, ”said Pashinyan, stating that the criminal case on Amulsarconsists of 140 volumes, and the“ ELARD ”conclusion is 500 pages, and a dialogue was held with all parties on each issue , all the arguments and counterarguments were considered.