In front of Armenian parliament, between police officers and  participants opposed to exploitation of Amulsar a brawl took place 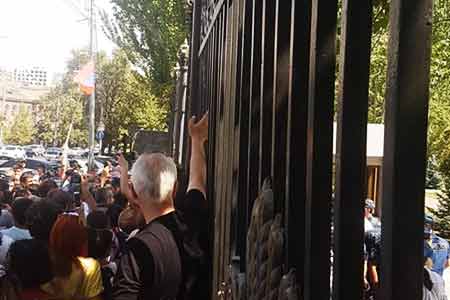 ArmInfo. Activists, environmentalists and residents of the city of Jermuk, who oppose the exploitation of the Amulsar Gold Mine, gathered at the gates of the  National Assembly of Armenia. They were going to hold a protest in  the National Park, but law enforcement forces blocked their path. New  police forces are pulling into place.

A little earlier between the police and the protesters there was a  brawl.  To recall, at these minutes in the office of the"Civil  Contract",  party of authorities a closed discussion of Prime  Minister of Armenia Nikol Pashinyan with the MPs of the "My Step"  faction is held. The meeting was convened after the prime minister's  meeting with environmentalists, activists and residents of the city  of Jermuk opposed to the exploitation of the Amulsar Gold Mine.

At the moment, there have been no official comments regarding the  outcome of the meeting. Only some activists and environmentalists,  having left the presidential residence, said they were unhappy with  the discussions and intend to continue their struggle, guided by the  slogan: "Amulsar should remain a mountain, full stop." As one of the  participants in the meeting said, Nikol Pashinyan did not want to  hear their arguments, because " the only reference point for the  prime minister at present is the opinion of the Investigative  Committee"