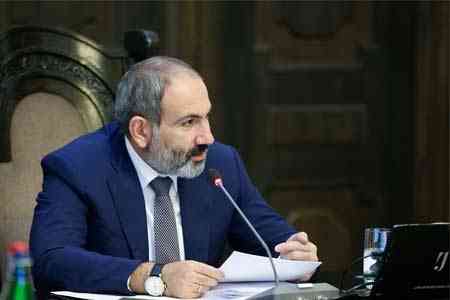 ArmInfo.After a meeting with environmentalists, activists and residents of the city of Jermuk, who oppose the exploitation of the Amulsar Gold Mine, Prime Minister of  Armenia Nikol Pashinyan convene a closed meeting with MPs of the "My  Step" faction. The meeting takes place in the office of the Civil  Contract party.

As the MP of the My Step faction, chairman of the standing committee  of the National Assembly of Armenia on economic issues Babken Tunyan  stated in an interview with reporters, if there are no sufficient  grounds for terminating the mine's activities, that are, "the reasons  that will make it possible to win the possible arbitration process,  then the mine definitely needs to be exploited. " "If we revoke  Amulsar's license in these conditions, then we should withdraw the  permission to operate all the mines of Armenia by the same logic. Are  we ready for this?" Tunyan asked, once again emphasizing that this  scenario with Lydian Armenia may become a very negative signal for  any external investor.

It should be noted that the discussion with all interested parties on  the issue of Amulsar and with the participation of representatives of  the Investigative Committee recently ended at the Presidential  residence on Baghramyan26.

At the moment, there have been no official comments regarding the  outcome of the meeting. Only some activists and environmentalists,  having left the presidential residence, said they were unhappy with  the discussions and intend to continue their struggle, guided by the  slogan: "Amulsar should remain a mountain, full stop." As one of the  participants in the meeting said, Nikol Pashinyan did not want to  hear their arguments, because " the only reference point for the  prime minister at present is the opinion of the Investigative  Committee".

To recall, on August 14, the Investigative Committee of Armenia  submitted an expert opinion on the Amulsar project of the Lebanese  consulting company Earthlink & Advanced Resources Development  (ELARD). As the head of the Committee Hayk Grigoryan stated at a  government meeting on August 15, 3 important conclusions can be made  on the basis of the expert opinion. First of all, as Grigoryan noted,  this refers to the fact that there is no direct connection between  the underground waters located on the territory of the Amulsar  project and the thermal hot springs of Jermuk. There is also no  connection with the waters of the Sevan basin. "At the same time,  during an earthquake, a certain concentration of acid drainage can  penetrate into the basin of Lake Sevan through the reservoirs of  Spandaryan and Ketchut. However, the combination of this  concentration will be insignificant on the scale of Lake Sevan," the  head of the investigating body said. The third important conclusion  that can be drawn based on the expert's conclusion is that the  possible impact of groundwater from the Amulsar field on the Arpa,  Debet and Darb rivers can be mitigated if Lydian Armenia takes 16  environmental mitigation measures proposed by experts.  As Grigoryan  pointed out, representatives of Lydian Armenia have already expressed  their readiness to implement 15 of the proposed 16 events: they are  already carrying out 10 events, and they will be ready to conduct  another 5 measures in the near future. The head of the Committee  noted that at present there are grounds for terminating the criminal  case instituted under Art. 282 of the Criminal Code of the Republic  of Armenia (Concealment or willful misrepresentation of information  on environmental pollution.