Security Council of RA: Constitutional reforms will not be dictated  by political considerations, but by the desire to improve the justice  system 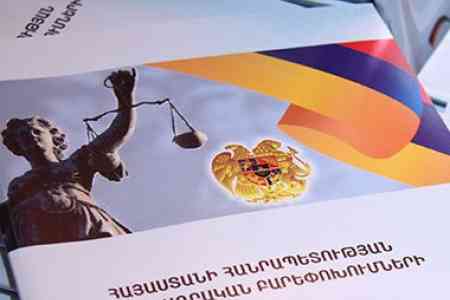 ArmInfo.Constitutional reforms will not be dictated by political goals, but by the desire to improve the justice system. Secretary of the Security Council of Armenia Armen  Grigoryan stated this in an interview with reporters on August 8.

Commenting on the intention to reform the country's main law, Armen  Grigoryan stated that the justice sector in the country needs  reforms, and some of them cannot be implemented without  constitutional amendments.

Earlier, on August 6, on his Facebook page, Minister of Justice of  Armenia Rustam Badasyan announced the upcoming changes to the  country's Constitution, explaining that it is planned to form a  specialized group in order to carry out Constitutional reforms, which  will be done in February 2020.

According to the Minister of Justice, some elements of transitional  justice will also be in the document on the judicial strategy, which  will be published in the near future.

As for the mechanisms for checking the judges and other officials for  integrity, the same package of amendments to the Judicial Code is  ready, which, after internal discussions and some amendments, will be  submitted for public discussion in the coming month.