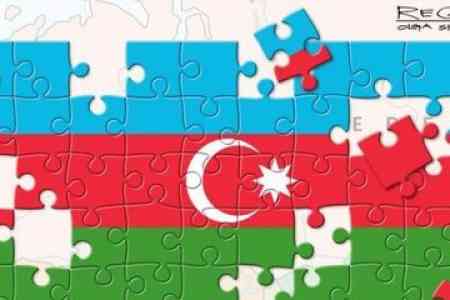 Thus, two Azerbaijani structures reacted to the statement of the  Armenian prime minister regarding the position of Yerevan on the  settlement of the Nagorno-Karabakh conflict.

Hikmet Hajiyev, the head of the foreign policy department of the  Presidential Administration of Azerbaijan, as haqqin.az informs,  stated that Baku categorically rejects Pashinyan's statement that  Karabakh is part of Armenia.  "Nagorno-Karabakh is part of  Azerbaijan, it is the historical land of Azerbaijan and its integral  part. The international community recognizes and supports the  territorial integrity, including Nagorno-Karabakh, and the  sovereignty of Azerbaijan. The Azerbaijani state and people will  never allow attempts to annex Nagorno-Karabakh by Armenia and violate  the territorial integrity of our country through the military  occupation by Armenia, "Hajiyev said, while assuring that Pashinyan's  statements that Artsakh is Armenia and its appeals to unite it with  Armenia is another open demonstration of the fact that "the true goal  of Armenia is occupation.'' At the same time, Hajiyev expressed his  conviction that calls to join Artsakh to Armenia should be regarded  as irresponsibility and disrespect for the international community  and, in particular, for the co-chairs of the OSCE Minsk Group, who  are responsible for resolving the conflict through negotiation.  At  the same time, he assured that at the level of the Prime Minister,  Armenia "insults and violates on international norms and principles,  the UN Charter, the Helsinki Final Act and destroys the negotiation  process on the settlement of the Nagorno-Karabakh conflict, which is  conducted through the mediation of the OSCE Minsk Group co-chairs."  ''After this, the co-chairs of the OSCE Minsk Group should answer the  question about the future negotiation process.  With this statement,  the Prime Minister of Armenia refutes himself, and admits that his  recent statements that he cannot speak on behalf of Nagorno-Karabakh  are nothing but nonsense and lies. Thus, the Armenian leadership  openly proves that its participation in the negotiations is nothing  but hypocrisy and misleading the international community'', Hajiyev i  said n particular.

The Foreign Ministry of Azerbaijan made a no less eloquent statement.  "Despite the fact that his (Pashinyan's) statements were mainly  intended for an internal audience, this does not give him any reason  to commit annexationist attacks on the Nagorno-Karabakh region of the  Republic of Azerbaijan.  The aggressive statements of the Prime  Minister of Armenia are in clear contradiction with the spirit and  essence of the negotiations over the long years of settlement of the  Nagorno-Karabakh conflict, including the discussions that took place  during the recent meetings between Armenia and Azerbaijan. This is  also a big blow to the negotiation process, mediated by the co-chairs  of the OSCE Minsk Group. Such statements by the political leader of  Armenia, which are completely alien to the subject of many years of  negotiations, do not correspond to the calls voiced by Armenia itself  for an "exclusively peaceful resolution of the conflict". N.  Pashinyan's speech in Stepanakert revealed his true face, "the  Azerbaijani Foreign Ministry noted in particular, assuring that  Azerbaijan will never" reconcile with the occupation of its  territories and continue its efforts to liberate the occupied  territories. "