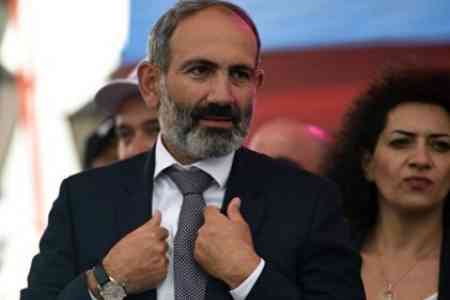 ArmInfo. Armenian Prime  Minister Nikol Pashinyan began his speech on the Renaissance square  in Stepanakert with the chanting of the "Union" appeal, which was  well known during the Karabakh movement in 1988, then he called to  honor the memory of everyone who gave their lives for the freedom of  Artsakh with a minute of silence. Pashinyan continued his speech with  the reading of his poem - "Soldier on plain."

Then, the head of the Armenian government, addressing all the  participants of the 7th Pan-Armenian Summer Games, stated that this  event not only allowed to organize this unprecedented event, send an  important message to all Armenians on the organization of a number of  issues related to the future existence and development of Armenia and  Artsakh, and important for the future. "Now a lot is being said that  the velvet revolution of spring 2018 in Armenia established new  realities in Armenia, which should have a positive impact on both  Armenia and Artsakh and the Diaspora. To find an organic answer to  this question, it is necessary to understand what happened in our  country in the spring of last year, "the Prime Minister said, while  assuring that the velvet revolution did not lead to socio-economic  upheaval of the country. At the same time, he also recalled the role  that the Armenian people are endowed with the Constitution, according  to which it is the Armenian people who decide their own fate and  future.  Pointing out that the velvet revolution consolidated  Armenians around the world, Pashinyan noted the important role of  Artsakh in this matter. According to him, if usually Armenia was the  rear for Artsakh, then in the spring of last year, while maintaining  stability on the front lines, Nagorno-Karabakh ensured a secure rear  of Armenia, giving it strength, strength and confidence. "Any  instability on the front line would have turned everything upside  down. We bow our heads in front of you," he said.

According to the Prime Minister of Armenia, when the Pan-Armenian  Revolution is said, it is understood that it took place not only in  Armenia, but also in Artsakh and the diaspora around the world.  According to him, the revolution began last year, but it did not end,  and it continues in Armenia, Artsakh and the Diaspora, and for its  successful implementation it is necessary to change the thinking, to  abandon the former, ossified ones.

The Prime Minister of Armenia also pointed out the importance of not  thinking about separating each other into Armenians of Artsakh,  either from Gyumri or Diaspora, and the importance of moving towards  the realization of national goals to completely eliminate the  separation barriers between the homeland and the Diaspora. "We must  unite efforts to solve one task - to develop Armenia and Artsakh in  every sense, as the successes of Armenia and NKR will make the  diaspora stronger, will contribute to repatriation," he said,  recalling the many years of evil in the form of migration, from which  for years, Armenia fought unsuccessfully.

According to him, not only Armenia, but also the Diaspora is facing  emigration, and the reason for this is isolation from the Motherland.  Pashinyan sees the solution to the problem in being Armenian again  fashionable, interesting and attractive. "The development of Armenia  and Artsakh as a strong competitive country should be a powerful  incentive for repatriation and increasing interest in their historic  homeland. The consolidation of forces will allow mega-projects of the  government to be resolved," the RA Prime Minister summed up.