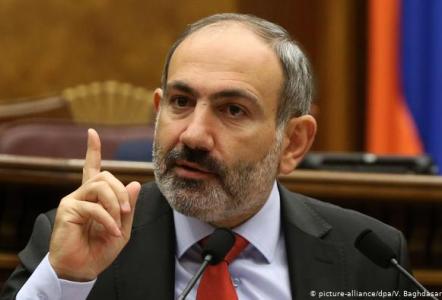 ArmInfo.Returning from vacation, Armenian Prime Minister Nikol Pashinyan appealed to citizens of the country via Facebook and partially declassified a  secret document, developed back in 2014, which spoke about serious  problems in the institutional development of the country.

As one of the examples, Pashinyan called the problem of road  construction. According to him, even in the case of the availability  of the necessary funds, the roads in Armenia were actually built for  half a year, and then they became unusable. Companies won tenders,  spent money, but the quality of these roads was no good. "Today we  have created mechanisms ensuring that money is not allocated to such  contractors, but the essence of the problem does not change. When you  read this document, you get another confirmation that the entire  system of state administration of Armenia was based on corruption.  And when the corruption factor is removed, it becomes clear that  under it there was no government system at all, "Pashinyan stressed.

According to him, this is the biggest problem and today's government  should create management institutions from scratch - an independent  judicial system, a system of public procurement. Earlier it seemed  that in Armenia there are at least some institutions, but it turns  out that all this was imitative in nature. In this regard, the prime  minister believes, it is necessary to work out strategic and tactical  decisions for the creation of these state-run government  institutions.

He brought the example of the government's struggle against the  "black woodcutters" of Ijevan, when country's population fully  supported the government's position on the inadmissibility of the  destruction of the country's wealth only because some people solved  their social issues through deforestation, especially since, by and  large, just a group of people grew rich.

When traveling to Gyumri, the Prime Minister realized that it was  impossible to further maintain people's attitudes about life at the  expense of humanitarian aid or a problem related to the fact that  talented young people are deprived of the opportunity to study due to  lack of funds - a problem that should be in the center of attention  of the state.

He expressed his satisfaction that the population of the country  understands the philosophy of the authorities about the need to earn  a living by their labor and in this regard welcomed the decision of  the government to amend the tax legislation on exempting  microbusiness from taxes. These changes will be gradually introduced  and will be fully operational in 2020. "Our logic is that the state  provides certain guarantees in the field of healthcare and the social  sphere, creating opportunities for work, and people, families, need  to meet their immediate needs at the expense of their own work, their  own legitimate activities. Already today in Armenia there are some  opportunities for work that are not properly used and the  government's task is, on the one hand, to encourage people to take  advantage of economic opportunities, and on the other - to constantly  expand them.

According to Pashinyan, it is necessary to understand the main task  of transition from the "limited" economically oligarchic system to an  inclusive development system. "We want to make sure that as many  people as possible participate in the formation of the country's  gross product. This does not mean that we must prevent the oligarchs  from working, we must eliminate the artificial obstacles created by  them for the purpose of personal enrichment and, on the other hand,  by reforming tax policy, increase opportunities for others, increase  people's access to preferential credit funds, etc. , stimulating  people to conduct and expand economic activity, creating equal  conditions for people.

Pashinyan also stressed the importance of developing educational  services in the country noting that for a good life, people should  have a good education and not necessarily higher education. He noted  that not always the country's universities provide it. "People say  that having a higher education they still can not find a job. And  when you ask how many languages such a person knows, it turns out  he/she speaks only Armenian. This is not a higher education.

The prime minister stressed that the task was set to turn Armenia  into an industrial, technologically developed country. This does not  mean that the state will not stimulate and develop agriculture or is  not interested in the development of the mining industry, but their  share in GDP should be small, yielding to the manufacturing industry,  technologies and services.

Pashinyan also stressed the great importance of involving the female  half of the population in the economic life of the country, calling  unacceptable the traditional attitude towards women as incapable of  running their own business and participating in improving family  welfare. He believes that this important potential is actually unused  in Armenia. "The velvet revolution" became possible because women's  social activity increased significantly, which means that women are  capable and should be active in increasing the country's  socio-economic potential, " the Prime Minister said.