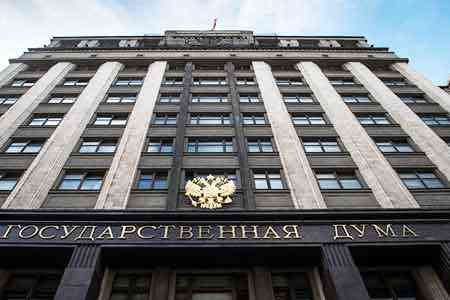 ArmInfo.At the plenary meeting, the State Duma adopted in the third and final reading a law simplifying the granting to certain categories of foreign citizens of  a permit for temporary residence and obtaining a residence permit in  Russia. This was reported on the website of the State Duma

The law introduces the possibility of foreign citizens obtaining a  permanent residence permit in Russia.  Now, we recall, it is issued  for a period of five years with the need for subsequent renewal.

The terms of consideration of applications for the issuance of a  temporary residence permit in Russia are also reduced to four months  (now six months).

The list of categories of foreign citizens who can get a temporary  residence permit without taking into account government quotas is  also expanding. These are, in particular, citizens who were born on  the territory of Russia, are married to a citizen of the Russian  Federation residing in the country, are participants in the state  program for the voluntary relocation of compatriots, refugees from  Ukraine, as well as those who are resettled to Russia in accordance  with international treaties protection of the rights of immigrants.

<Those who are connected with our country by their roots and speak  Russian, who have relatives here, who got an education here and are  ready to work for the good of Russia, should not be confronted with  bureaucratic red tape. All the necessary documents for the residence  of such citizens in Russia should be drawn up as soon as possible>,  stressed the Chairman of the State Duma Vyacheslav Volodin.

He noted that the President of the Russian Federation <consistently  implements the policy of supporting our compatriots who live in other  countries but want to live in Russia. First of all it concerns those  who in their homeland became a victim of political conflicts and  wars. " Also, it was previously simplified to obtain Russian  citizenship for residents of Donbass.

"And the State Duma will support further steps that are aimed at  restoring justice in relation to those with whom we have the same  language, common history and culture," said the Chairman of the State  Duma.

Chairman of the State Duma Committee on Issues of Public Associations   and Religious Organizations, Sergei Gavrilov, , noted that the  adopted law would allow the provision of a perpetual residence permit  to our compatriots; foreign qualified professionals working in Russia  for at least six months; foreign students who graduated with honors  from Russian universities; to foreign minors who receive a residence  permit with their parents, or if the parent already lives in Russia  permanently; this legislation can also be used by citizens of Ukraine  (regardless of their place of permanent residence in Ukraine), who  plan to live and work in the Russian Federation for a sufficiently  long period of time.

<The proposed changes will solve the problems of several millions of  our compatriots, Russian-speaking citizens of the states of the  former USSR. And for foreign qualified specialists and foreigners -  graduates of Russian universities who do not apply for Russian  citizenship, but are working or are willing to work in Russian  companies, comfortable conditions will be created for working in  Russia>, Sergey Gavrilov explained.

To note, according to official data of the last census (2011), 1  million 182.4 thousand (0.86% of the total population of Russia)  Armenians live in Russia. Armenians are the 6th largest nationality  of Russia after Russians, Tatars, Bashkirs, Ukrainians, Chechens and  Chuvash. Meanwhile, according to unofficial data, this number is much  higher.

We also note that, according to the Economy Times, the migration  increase in the population of Russia in January-April 2019 sharply  increased, exceeding the values of all the previous ten years. The  number of migrants from Armenia and Ukraine increased the most. In  January-April 2019, 12, 8 thousand people arrived from Armenia to  Russia. In 2018, this figure was 4.9 thousand people. The study also  notes that as of June 1, 2019, over 49 thousand Armenian citizens  were in Russia.