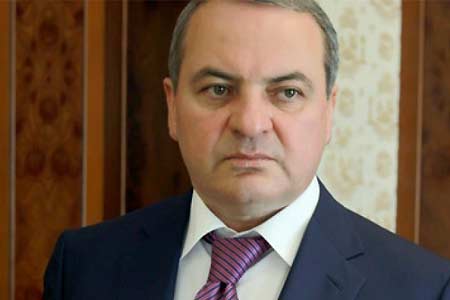 ArmInfo. Son of former MP and former head of  the Office of the President of Armenia Karen Karapetyan Narek Karapetyan has been charged with 2 clause 3 of part  182 of the RA Criminal Code (blackmail on a large scale). The press  secretary of the Investigative Committee of Armenia Naira Harutyunyan  said this in an interview with ArmInfo correspondent.

The Spokeswoman also stressed that as a measure of restraint in  respect of the latter, a subscription on his own recognizance was  chosen. Harutyunyan noted that another citizen was alo charged in  this case.

To note, earlier businessman Vahe Parazyan stated that Narek  Karapetyan, along with guards, beat him.  According to the press  service of the Investigative Committee, on July 4, the police  received a signal from the hospital that a man applied for medical  assistance (born in 1989) with numerous bruises and scratches.  He  said that on July 3, at 7:30pm, Karapetyan and his entourage used  force against him, after which on July 4, Karapetyan with ten other  persons beat him with a friend, extorting a large amount of money  from him.  During the investigative actions, it was established that  Karapetyan and his friend on July 3, threatening and using force  against Parazyan, tried to get a large sum of money from the latter.  After that, Karapetyan again met with Parazyan and again demanded  money from the latter, however, he did not achieve anything.  Angry  Karapetyan invited Parazyan to a restaurant, threatened him with  using violence against his family.