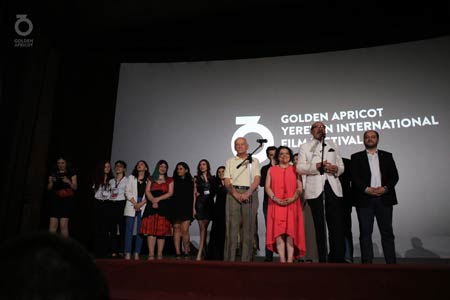 ArmInfo. The 16th Golden Arpicot International Film Festival summed up. On July 14 the final press conference of the festival took place.  It should be mentioned  that during the closing ceremony the jury announced the winners.   According to official source ''Ray & Liz'' by Richard Billingham won  ''Golden Apricot'' in Full-Length Films Competiton. ''Beanpole'' by  Kantemir Balagov was awarded ''Silver Apricot'' in the same  competition. ''Midnight Traveler'' by Hassan Fazili gained jury's  special mention.

In interwiev with ArmInfo correspondent, film critic, one of the  founders of the Golden Apricot film festival, Susanna Harutyunyan  noted that, on the whole, the festival was a success. <9 months ago,  when we started to work on organizing the festival, we transferred  the management to a new team, relatively new. Because these people  grew up and worked with us all the time. This team has been fostered  to some extent. And we are very proud of the new generation and we  believe that the experiment was a success in terms of the transfer of  experience, new concepts, ideas and "new blood" that the young people  brought to this festival. And I think that without the combination of  our experience and their enthusiasm, the festival will have no  future, "she said. Speaking about the organization of the festival,  Harutyunyan stressed that for 15 years there have been both great  successes and certain problems, and this year, in this context, is no  exception. "But until the child falls, he will not grow up," the film  critic said.

Regarding the film, which became the owner of "Golden Apricot", Mrs.  Harutyunyan stressed that in general she agrees with the opinion of  the jury. <This is a tough social drama, representing a cut of  British society>, the film critic said, noting that the film really  leaves a strong and somewhat depressing impression. "It so happens  that we think that certain problems can exist only in our region, due  to difficulties, in particular, related to the economic situation.  But it turns out that there is a certain level of people, and despite  the fact that they live in one of the richest countries in the world,  they have problems that are peculiar to us, "she said.

At the same time, Harutyunyan expressed satisfaction with the  nomination by the jury of the Special Mention, which was awarded to  the documentary film of the Afghan director Hassan Fazili "Midnight  Traveler". <This director is a refugee from Afghanistan, and for 3  years he has documented his own life from three telephones - all the  way that he traveled, right up until the moment he received a  residence permit in Europe. This is quite an emotional journey,  "Harutyunyan shared her impressions.