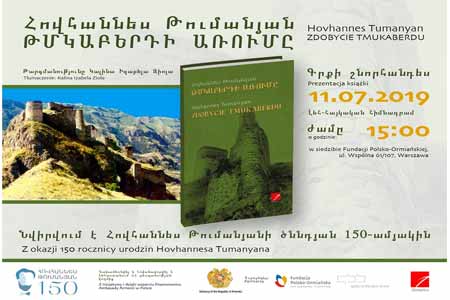 ArmInfo. With the assistance of the Armenian Embassy in Poland and the Polish-Armenian Foundation (Fundacja Polsko-Ormianska), an event was held in Warsaw, devoted to the 150th anniversary of the birth of the great Armenian writer  Hovhannes Tumanyan.

According to the press service of the Foreign Ministry of Armenia,  for the first time Hovhannes Tumanyan's "The Capture of Tmbkaberd"  poem was presented to the Polish reader in the translation of Kalina  Isabella Tsiola.

Armenian Ambassador to Poland Samvel Mkrtchyan briefly presented the  work and social activities of the great poet, his philosophy. He, in  particular, noted the style of creativity of Tumanyan is simple, but  at the same time, meaningful, has a deep content and is informative  for present and future generations.  During the event, a documentary  film dedicated to Hovhannes Tumanyan was shown. Its participants,  signed by Kalina Isabella Tsiola, were presented with copies of the  translation, and the Embassy of Armenia - to a number of libraries.

The translation of the poem was initiated and sponsored by the  Armenian Embassy in Poland. It was printed in the "Antares"  publishing house.