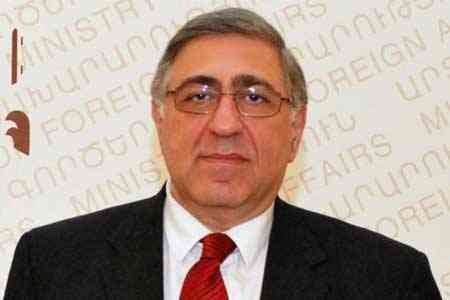 ArmInfo.A Civil funeral for Armenian Ambassador to Great Britain and Northern Ireland Arman Kirakosyan will be held at 6:00 pm on July 12 in the Church of Saint Sargis in  Nor-Norq.

The last farewell to the ambassador will take place from 12:00 -2: 00  on July 13 at the House of Chamber Music after Komitas.

Arman Kirakosyan will be buried in the pantheon of the Yerevan city  cemetery.

To recall, on July 6, at the age of 63, Extraordinary and  Plenipotentiary Ambassador of Armenia to the United Kingdom and  Northern Ireland Arman Kirakosyan suddenly passed away.

Arman Kirakosyan was born in 1956, in 1977 he graduated from the  Faculty of History and Geography of the Armenian Pedagogical  Institute named after Abovyan. He joined the Foreign Ministry of  Armenia in 1991, in 1994 he had the diplomatic rank of ambassador  extraordinary and plenipotentiary.

In 1994-1999, he served as Ambassador Extraordinary and  Plenipotentiary of Armenia to Greece, since March 1999 he has been  doyen in Athens, Greece, and also in Cyprus, Slovenia, Croatia,  Albania and the Federal Republic of Yugoslavia.

On November 28, 2018, he was recalled from this post, as well as the  post of head of the Armenian mission to the OSCE and from the post of  the permanent representative of Armenia in the UN Office in Vienna  and other international organizations.

From November 28, 2018 - appointed Ambassador Extraordinary and  Plenipotentiary of Armenia to the UK.