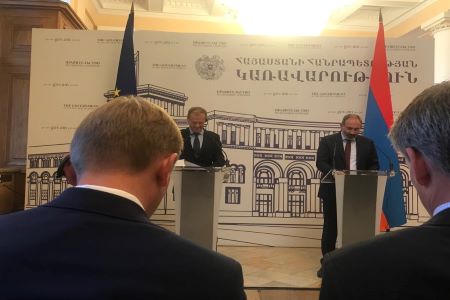 ArmInfo.Armenian Prime Minister Nikol Pashchinyan confirmed the commitment of the authorities of the country to strengthen democracy and ensure the rule of law, as well  as the fight against corruption. On July 10 the head of the Armenian  government stated this after the meeting with the President of the  European Council, Donald Tusk.

According to the Armenian Prime Minister, he is very pleased with the  visit of the head of the European Council. "In a relatively short  period of time, it was repeatedly the opportunity to meet with the EU  President. All our meetings were impressive and they were held in an  atmosphere of friendship and constructivism," Pashinyan said.

The Prime Minister also called today's meeting "very productive." The  parties discussed a wide range of issues relating to the relations  between Armenia and the EU. An exchange of views took place on the  internal political life of the republic and sectoral directions, as  well as regional processes.

The Prime Minister noted that he confirmed the commitment of the  authorities of the country to strengthen democracy and ensure the  rule of law, as well as the fight against corruption. During the  meeting, the head of the Armenian government briefed the EU president  on the efforts of the authorities of the republic in the matter of  creating an independent judicial system, stressing the importance of  assisting European structures and the EU in this regard.

Nikol Pashinyan noted the political commitment of the RA authorities  in the issue of expanding relations with the EU countries. In this  context, he stressed the need for early ratification of the  Armenia-EU Comprehensive and Enlarged Partnership Agreement (CEPA) by  the EU Member States. "This agreement is a tool that not only  contributes to the development of relations between Armenia and the  EU, but also the implementation of the reform agenda in Armenia," he  explained. As Pashinyan pointed out, the Armenian authorities, in  cooperation with the relevant EU bodies, developed a roadmap for the  implementation of CEPA, which was approved by him on June 1.

In addition, as noted by the prime minister, the parties touched upon  the issue of starting a dialogue on liberalizing the visa regime.  Nikol Pashinyan noted Armenia's interest in this issue, including in  terms of expanding interpersonal relations. The Armenian Prime  Minister asked Donald Tusk to convey to the EU countries a request to  complete the ratification process as soon as possible. The  interlocutors also touched upon the Eastern Partnership program.

Armenian Prime Minister and EU President also touched upon regional  processes. The Prime Minister thanked the EU for its balanced  position on the settlement of the Nagorno-Karabakh conflict and  unconditional support for the efforts of the OSCE Minsk Group  Co-Chairs. Pashinyan expressed confidence in the sequence of the EU's  position on this issue. In conclusion, Pashinyan thanked the head of  the European Council for effective cooperation and wished him success  in his future activities.

The Comprehensive and Extended Partnership Agreement between Armenia  and the EU (CEPA) was signed in Brussels on November 24, 2017. The  agreement has already been ratified by the Armenian parliament, as  well as by Estonia, Latvia, Lithuania, Poland, Bulgaria, Luxembourg,  Great Britain, Romania, Denmark, Sweden, Finland, Slovenia, the Czech  Republic and Malta.