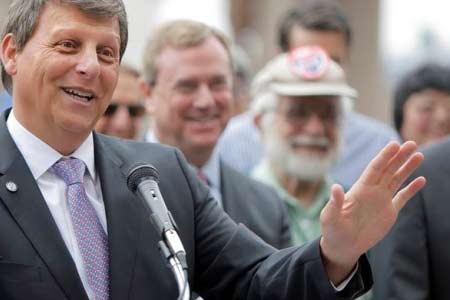 According to the press service of the government, the Prime Minister  noted that in the conditions of political changes in the country, new  opportunities have been created for establishing relations with the  Diaspora. "Armenia should further strengthen ties with the Diaspora,  and Glendale is one of the major centers playing an important role in  this matter," the head of government said.

In turn, the mayor of Glendale noted that the Diaspora is inspired by  the new Armenia. In this vein, Ara Najaryan stated that the Armenians  of the Diaspora trust the government of Armenia and are pleased that  "the country is in safe hands".

At the same time, he said that as a result of the changes that have  taken place, the necessary conditions for life and business have been  created for many Armenians in the Diaspora in their homeland.  Najaryan particularly welcomed the appointment of Zare Sinanian as  Chief Commissioner for Diaspora Affairs.  According to the report,  during the meeting, Nikol Pashinyan and Ara Najaryan discussed issues  relating to the future of Armenia, the goals of the government and  the strengthening of Armenia-Diaspora relations.