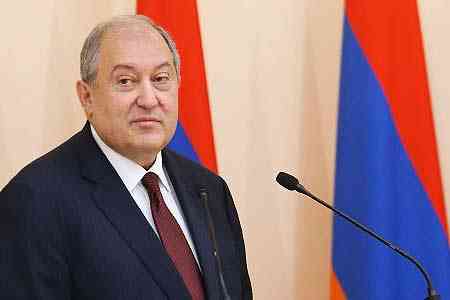 ArmInfo. Armenian President Armen Sargsyan, who is on a working visit to the Swiss Confederation on June 24 in Zurich, took part in the opening ceremony of the International Festival of Science and Art STARMUS.

This year, the 5th STARMUS festival will be attended by 7 cosmonauts participating in the Apollo program, 12 Nobel Prize winners and renowned art representatives who hold discussions, in particular, on microbiology and biochemistry, astronomy and neurology.

The festival was opened by the author and the main organizer of his ideas, the Armenian astrophysicist Garik Israyelyan, who works at the Institute of Astrophysics of the Canary Islands.

The European Commissioner for Research, Science and Innovation Carlos Moedas delivered a speech.  Armen Sargsyan, in his welcoming speech, invited to the next, sixth STARMUS festival to come to Armenia. "We will be glad to see all of you in Armenia - scientists, Nobel laureates, cosmonauts, musicians, artists, politicians," the president said, noting that Armenia is one of the oldest civilizations in the world.

The President also spoke about more than 2,800-year-old Yerevan, about the Metsamor Observatory of the Urartu period, in particular, noting: "I want to show you also the well-known Byurakan Observatory.  Armenians value science and education."

Armenian President presented new presidential initiatives, One of which is called ATOM (Advanced tomorrow) and will have several components. It is planned that this initiative will include a city of science and technology, where major international organizations, research centers and universities will be represented, tomorrow's museum will also be created, not the museum of science and technology of the past, but the Museum of the Future.

Another initiative is the creation of a new presidential award called the Big Bang in the fields of innovation, science, technology, education, which will have an impact on the big bang in the 21st century.  The President invited the founders and members of STARMUS-famous musicians, scientists, astronomers to join the council being created to determine the winners next year.