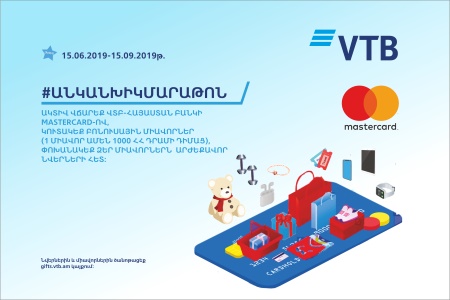 ArmInfo. VTB Bank (Armenia), together with the international payment system MasterCard, has already launched the "Cashless Marathon" campaign for holders of MasterCard credit and debit cards for the 7th time. The press service of the bank told ArmInfo that the action started on June 15 of this year and will last until September 15 inclusive.

According to the source, customers, making non-cash transactions via VTB Bank (Armenia) MasterCard Standart Unembossed, Standart and Gold debit and credit cards during this period, in the territory of Armenia and abroad, as well as via the Internet, will automatically accumulate bonus points and will be able to exchange them for valuable gifts.

"Participants of the # cashless marathon campaign have the opportunity at any time to check the amount of accumulated bonus points and exchange the accumulated points for gifts on the website http://gifts.vtb.am/.>, the bank informs.

Detailed information about the "Cashless Marathon" campaign can be obtained on the official website of the Bank www.vtb.am, in the branches of the Bank and in the Contact Center at 87-87.

According to the 18th issue of the analytical review "Armenian banks in the card business" prepared by ArmInfo IC, VTB Bank (Armenia) holds the lead in the number of active Visa and MasterCard cards, as well as in the volume of ATM transactions, occupying the 2nd position in total plastic transactions and the number of ATMs. As of October 1, 2018, the bank had 366.7 thousand cards, of which 219.5 thousand are MasterCards and 147.1 thousand are Visa. The volume of plastic transactions via Bank cards exceeded in the first 9 months of  2018 199.2 billion drams, of which 181.1 billion drams - ATM transactions, and 6.4 billion drams - online transactions. The number of ATMs of VTB Bank (Armenia) at this date is 163, of which 76 are installed in the capital and 87 in the regions of Armenia. Of these ATMs, five are equipped with a cash-in function. The bank has its own processing, linked to the processing of the VTB Group.

It should be noted that VTB Bank (Armenia) CJSC became a member of the VTB international financial group in April 2004. Currently, the second largest in Russia, PJSC "Bank VTB" owns 100% of VTB Bank (Armenia) shares. The Bank traditionally ranks among the leaders of the banking system of the Republic of Armenia by major indicators. The branch network of VTB Bank (Armenia) covers 70 divisions with a presence both in the capital and in all regions of the country. Moreover, both by the total number of branches and the number of regional branches, the Bank retains its leadership, occupying the second position in the number of capital divisions.