Eric Grigoryan: Secondary waters of fish farms in Armenia will be  directed to supply irrigation systems 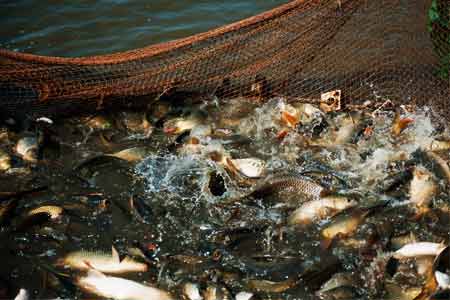 ArmInfo. The secondary waters of the fish farms of Armenia will be used to supply irrigation systems.

The Minister of the Environment of the Republic of Armenia Eric  Grigoryan said this at a press conference on June 5. He explained  that this initiative will be implemented with funds from the grant  budget provided to the Ministry of the Environment in the amount of 5  million euros within the framework of Armenia-European Union  cooperation. According to preliminary estimates, the project will  require 2 billion drams. In particular, he noted that in the  Sayat-Nova community (Ararat region), this practice is already being  used in pilot mode. However, in the end, according to Grigorian, the  project will be finalized, since it is planned to introduce new  solutions. The Minister stressed that the implementation of the  initiative is foreseen for the current year.

As part of this grant assistance, according to the head of the  department, an inventory of abandoned wells and physical  reinstatement of tailings are also expected.