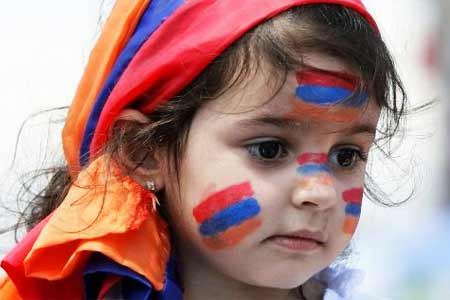 ArmInfo. Days of the Armenian culture,  organized on the initiative of the Public Organization of the  Assembly of Armenians, as well as with the assistance of the Armenian  Embassy in Russia, the Russian and Novo-Nakhichevan Diocese of the  Armenian Apostolic Church, started in Moscow. Cultural events began  on May 27 and continue until June 1 inclusive.

To note, the festive events took place on the initiative of the  Public Organization of the Assembly of Armenians, as well as with the  assistance of the Armenian Embassy in Russia, the Russian and New-  Nakhichevan Diocese of the Armenian Apostolic Church.  The opening  ceremony of the Days of Armenian Culture in Moscow was held in the  hall of the Moscow State Tchaikovsky Conservaroty - Tigran Mansuryan  anniversary evening, which turned 80 this year.

On the eve of the unique gastronomic evening GOURMET FEST was held.   For the first time, under the direction of two famous chefs of  Michelin-starred restaurants, Karen Torosyan (Bazar restaurant,  Brussels, Belgium) and Stefano Ciotti (Nostrano restaurant, Pesaro,  Italy) in collaboration with chefs of leading restaurants in Armenia  (Chinar, The Club, Mayrig , Lavash) created a special menu that  represents a unique fusion of Armenian traditional and high cuisine,  based on the use of Armenian culinary traditions and techniques of  European cuisine.

On May 29, a meeting of the Committee of Innovative Technologies and  Science of the Assembly of Armenians is scheduled.  Committee members  will discuss social-entrepreneurial and scientific projects that  contribute to the preservation of national identity and culture,  language, strengthening communities and the development of tourism in  Armenia.  At the meeting, the leading representatives of IT and  science will determine the initiatives for the Assembly of Armenians  for 2019-2020.

On May 30, the ceremonial opening of the Consular Section of the  Armenian Embassy in the Russian Federation in honor of the 300th  anniversary of the Lazarev family will take place.  RA Ambassador to  the Russian Federation Vardan Toghanyan, Consul Ara Mnatsakanyan, as  well as members of the Assembly of Armenians will be present at the  opening of the Consular Department.

On June 1 will be the closing of the Days of Armenian Culture in  Moscow, the display of cartoons of Armenian multipliers based on  H.Tumanyan's fairy tales at the State Tretyakov Gallery, organized by  the RA Embassy in the Russian Federation and timed to the  International Children's Day.

The Assembly of Armenians and the organizers of the Days of Armenian  Culture in Moscow hope that the events will become a platform for  establishing close ties between the Armenian Diaspora among  themselves, as well as with successful and respected people outside  the Diaspora, and equally contribute to enhancing the prestige of  Armenia, preserving its national identity, popularization of its  centuries-old culture and ancient language.