In Paris, a memorial plaque was inaugurated at first Paris apartment  building of Aznavour family 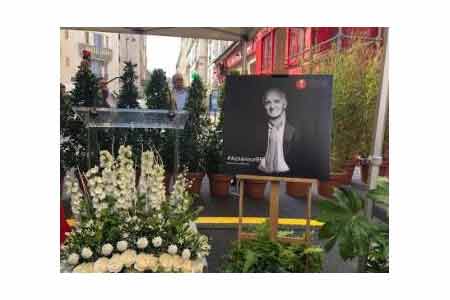 ArmInfo. A memorial plaque of Charles  Aznavour was inaugurated at the first Paris apartment building of the  Aznavour family. About this reports <Aznavour Foundation>.

According to the source, on the eve of the 95th anniversary of  Aznavour, events dedicated to his work are scheduled in different  parts of the world. On May 21, in the capital of France, with the  cooperation of the City Hall of Paris and the Aznavour Foundation,  two events took place - a memorial plaque was inaugurated at the  first Paris apartment building of the Aznavour family. The opening  ceremony was attended by the Mayor of Paris Anne Hidalgo relatives  and fans of chansonnier.

The co-founder of Aznavour Foundation, Aznavour's son, Nicolas  Aznavour, in his speech noted that the goal of the family and the  Aznavour Foundation is to preserve cultural and humanitarian  activities and the heritage of chansonnier. "The opening of the  memorial plaque marks the beginning of a series of events in honor of  the anniversary of the chansonnier, which will be organized not only  in Paris, but throughout the world," said Nicolas Aznavour.

In turn, the mayor of Paris, Ann Hidalgo, noted that Paris pays  tribute to Charles Aznavour: "He is one of the favorite sons of our  city". She thanked the Aznavour Foundation for organizing events  dedicated to the anniversary of the artist, assuring that other  surprises await Parisians.

The celebration continued with a concert in the square adjacent to  the City Hall of Paris.