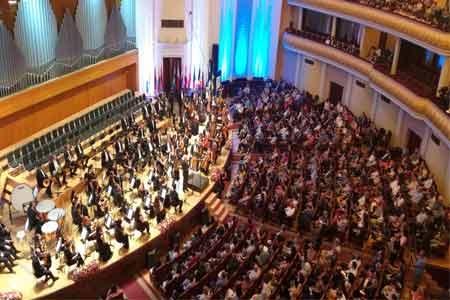 ArmInfo. In the framework of the Days of Europe a concert of classical music has been held in Yerevan at the Academic Theater of Opera and Ballet named after Spendiaryan.  Ludwig van Beethoven's Ninth Symphony was performed.

A welcoming speech was made by the head of the EU Delegation in  Armenia Piotr Switalski. He read the quatrain of the Armenian poet  Baghdasar Dpir "The Dance of Joy" in Armenian and English.

According to the European diplomat, despite the fact that the  quatrian was written a long time ago, it fully reflects the ties that  have developed between Armenia and the European Union. According to  Switalski, the Days of Europe and the events held within them  contribute to the strengthening of relations between the EU and  Armenia, in addition, they are a clear indication of common  aspirations. "For us, today more than ever it has become important to  protect our common European values. The European Union is our best  offspring in the entire history of Europe. And today, the task for us  is to preserve our common European values, it comes from the  interests of all, including Armenia. Powerful Europe will help  Armenia to become stronger ", said the diplomat, in conclusion of his  speech calling to enjoy the beautiful 74 minutes that the RA State  Symphony Orchestra will give, performing the 9th Beethoven symphony.

To note, the Days of Europe started in Yerevan on May 8 with the  exhibition in the Union of Artists. Days of Europe are held under the  motto "The Path to Europe" and walked through 5 cities of the  republic, the culmination will be in Yerevan.

The first regional open air concert was held on May 11 in the city of  Kapan, in Yeghegnadzor the events took place on May 12, in Ijevan -  on May 17, Dilijan - on May 18, in Gyumri - 19, meanwhile, the  culmination festivities under the open sky in the Armenian capital  will be held on May 26.