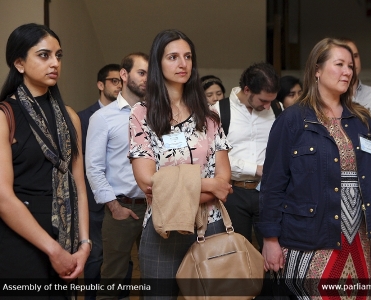 ArmInfo. Armenian Prime Minister  Nikol Pashinyan received about two dozen students of the School of  Management. Kennedy at Harvard University, who came to our country to  familiarize themselves with the management system, reforms and  changes in the RA government.

According to the press service of the  head of the government, the Prime Minister of Armenia spoke about the  processes taking place in the republic, stressing that the RA  government is consistently and resolutely pursuing democratic  development and development, which in turn will lead to real changes  in public life.According to Pashinyan, it is important that citizens  also participate in these changes, and by their actions give the  government the right to make these changes. "We are optimistic and  confident in our present and future.

We are confident that we will achieve our goals," said the head of  government.Touching upon his speech today about the judicial system,  Nikol Pashinyan noted that it was aimed at the problem of the lack of  judicial authority in the republic, which enjoys the confidence of  the people. The head of government stressed that the existence of a  truly independent and impartial judicial system is a vital necessity,  and the absence of such a system is the number one threat for our  country, so the solution to this problem is a public, nation-wide  demand.Then the Prime Minister answered a number of questions that  interested students regarding government priorities, judicial  reforms, the fight against corruption, the protection of human  rights, the development of civil society, Armenia's foreign policy  and other issues.