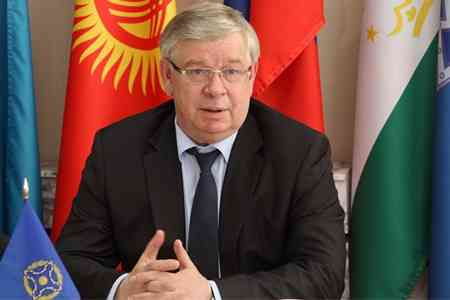 ArmInfo.  The difficult situation  persists in the Caucasus direction due to the unresolved  Nagorno-Karabakh conflict. Acting Secretary General of the  Organization Valery Semerikov in Bishkek stated this at the retreat  meeting of the Council of the CSTO Parliamentary Assembly.

During his speech, Semerikov highlighted in detail the most pressing  issues of the Organization's activities, as well as the main  challenges and threats that Member States face. The Acting Secretary  General of the CSTO noted the growth of conflict potential in the  world and assessed the situation in the Eurasian region as "difficult  with the prospect of further escalation of tension," saying that the  situation in the region is not simple due to the unresolved Karabakh  conflict. At the same time, he noted that "reducing tensions in the  controversy on this issue, as well as directly on the contact line of  the armed forces, give reason to hope that progress will be made in  finding a Karabakh settlement."

As a factor destabilizing the situation in the Caucasus, V.Semerikov  also noted the "proactive role of Tbilisi in the process of military  development of the region by the North Atlantic alliance."

He also expressed concern about the situation developing in the  Eastern European direction, namely, the growing number and scale of  NATO exercises, the planned buildup of the alliance's military  activities, and the deployment of its infrastructure near the borders  of Belarus and Russia. "Under the NATO flag, the American military  presence in Europe is increasing," said the Acting Secretary General  of the Organization.  According to him, the problem of the return of  non-strategic nuclear weapons on the territory of the nuclear powers  also causes concern.

Among other international issues affecting the security level of the  CSTO member states, the Acting Secretary General of the Organization  referred to the situation around the Treaty on the Elimination of  Intermediate-Range and Shorter-Range Missiles, as well as tasks  related to countering international terrorism, drug trafficking,  organized crime and illegal migration.

According to the Acting Secretary General of the CSTO, Afghanistan  remains a hotbed of regional instability. "In this country, fighting  and terrorist acts continue that take people's lives and do not allow  the state's economy to be restored. The steady trend towards  increased tensions on the Tajik-Afghan border is particularly  disturbing. The organization is actively working to exert a deterrent  effect and to strengthen the Tajik-Afghan border," he informed.

V.Semerikov stated that decisive measures are being taken by the  leadership of the CSTO to improve the power component of the  Organization. So, back in 2018, the countries agreed to hold six  joint exercises this year: three in Russia, two in Tajikistan and one  in Kyrgyzstan.

Referring to the Priority Directions of the CSTO during the  presidency of the Kyrgyz Republic in the Organization in 2019, the  Acting Secretary General reported that at present the Plan for their  implementation has been implemented by 72 percent. "I'm sure he will  be fully implemented for the next session," he added.