Mikayel Badalyan: The task of the new leadership of the Erebuni  Museum is to make it a highly intellectual and modern center 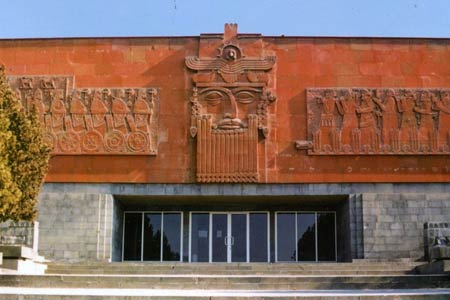 ArmInfo. The Erebuni Museum should become a highly intellectual and modern center, contributing to the development of cultural and educational tourism in Armenia. This was at a press conference, said the newly appointed director of the  Erebuni Museum- Reserve Mikayel Badalyan, noting that the complex  needs competent restoration.

<There are plenty of problems in the Museum; however, the main factor  hindering the development of the museum is human. It seems to people  that for the attractiveness of the museum and the growth of its  attendance it is enough only to keep it clean on the territory of the  reserve. But the situation is somewhat different. There is not even a  bathroom in the Erebuni Museum, that is, we cannot ensure the rules  of hygiene in the reserve today, "he said, assuring that the museum  needs modernization, which will make it more attractive and  recognizable.

He explained that the complex of the Erebuni Museum includes the  "Karmir Blur" monument (Red Hill), as well as the settlement of  Shengavit.

In this regard, Badalyan considers it extremely important that the  Erebuni Museum-Reserve has a unified management system to ensure the  commensurate development of the three complexes. <For many years, the  entire resource was concentrated only on Erebuni. In this sense, we  are waiting for hard work.  However, we will do everything in our  power to ensure that the reserve was and was perceived as one of the  most important historical, educational and modern centers  contributing to the development of cultural and educational tourism  in Armenia, "he said, raising the need for equipping the museum with  interactive stands, show light animation.

In addition, Badalyan, as the newly-appointed director of the museum,  sets himself the task of making the complex a highly intellectual  center without disrupting its natural structure.

<The territory of the museum can be a fantastic place for holding  event projects, concerts. With small investments you can achieve  great results, "he said.

According to Badalyan, the Yerevan Municipality reacted quickly  enough to the problems existing in the museum, and assured that in  the shortest possible time it would do everything possible to resolve  these issues.

He assured that by the fall these changes would be noticeable. The  Erebuni Fortress is one of the oldest fortresses that have survived  to the present day. The city of Erebuni was founded in 782 BC and is  identified with Yerevan, therefore, 782 BC it is also considered the  foundation year of Yerevan.