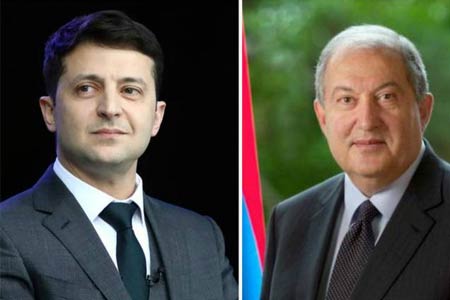 According to the press service of the Armenian leader, the message of  Sarkissian, in particular, states: "I am convinced that there is a  serious potential in interstate relations between Armenia and  Ukraine. I am full of hopes that Armenian-Ukrainian relations can be  raised to a new level for the benefit of the peoples of our countries  ".

The head of Armenia also wished Zelensky good luck, and peace and  prosperity to the friendly people of Ukraine.  To recall ,today, on  May 20, V.Zelensky took the oath to the Ukrainian people, after which  the head of the Constitutional Court announced that he would take the  office of head of state. Deputy Prime Minister Tigran Avinyan  represented Armenia at the inauguration.

The inauguration took place at the ceremonial meeting of the  Verkhovna Rada.

To recall, on April 30, the CEC of Ukraine officially admitted that  Zelensky won the election, gaining 73.22% of the votes in the second  round. Poroshenko supported 24.45% of voters.