Nikol Pashinyan: The time has come for surgical intervention into  judicial system 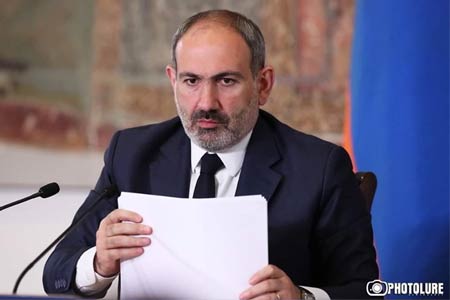 ArmInfo.As of today a legitimate executive and legislative power has been formed in Armenia, but the events of the last year showed that in Armenia there has never been  judicial authority enjoying the confidence of the people. This was  stated on May 20 by the Prime Minister of Armenia Nikol Pashinyan  during a government meeting with representatives of the three  branches of government.

According to the Prime Minister, the outcome of the activities of the  courts of Armeniais that the system does not enjoy trust of the  people at the moment, moreover every decision made by them is  perceived by citizens quite ambiguously.  Refraining from assessing  the validity and legality of decisions taken by the judicial  authority, since "it is not within his authority," Nikol Pashinyan  noted that as a representative of the people of Armenia, the supreme  sovereign of power in the country, he would do everything possible to  establish a legitimate judicial system.

Meanwhile, to this day, the Armenian people continue to perceive the  judiciary as a relic of the old, corrupt system. This, according to  Pashinyan, also indicates the lack of authority to make legal and  legitimate decisions by the judicial authority, which in turn means a  threat to the natural and stable functioning of the state and  ensuring national security of the RA.

Nikol Ppashinyan said that since taking office of prime minister he  made an unbreakable commitment to not to interfere in the activities  of the judicial system, which he "inviolately followed." "But, on the  other hand, unfortunately, I can not guarantee that the judiciary has  stayed away from the shadow and illegal manipulations of the old  corruption system, since their connections are still intertwined in  various ways," the premier said.

The head of government wondered how much we can be confident that the  courts are able to carry out an objective investigation of the March  1 case, given that dozens of illegal actions in Armenia were brought  to life precisely thanks to the connivance of the judicial system.  This, as the Prime Minister pointed out, also has a negative effect  on the result of the fight against corruption proclaimed by the new  government.

According to Nikol Pashinyan, he hoped that many judges realizing  that their value system does not coincide with the one proclaimed by  the new government of Armenia, will decide to voluntarily resign.  "Nothing has happened," the Prime Minister said, adding that the  authorities do not intend to tolerate such things any longer.

Maintaining such a situation in the judicial system, according to  Pashinyan, already carries a threat not only to Armenia's national  security situation, but also to economic development. As the head of  government pointed out, a judicial authority that is not trusted by  citizens is a direct threat to the formation of a proper investment  environment.

"The time has come for surgical intervention in the judicial system",  the prime minister said. This, as he explained, will be done in the  following way: all judges in the republic will have to pass a vetting  inspection. That is, as the head of the government pointed out, to  ensure full publicity of their connections, sources of income and  property, to tell all the details of their background. Further, all  the judges, whose decisions the ECHR recognized as a gross violation  of human rights, will have to resign. Those judges, who realize that  they are not capable of making fair and lawful decisions, will also  leave.  In addition, the government intends to speed up the  transition to a transitional justice system. "It is necessary to sum  up the work done in this direction within 1-2 months," he said.

At the same time, as Pashinyan stressed, the power, in order to  ensure the usefulness of work in this direction, is ready to take any  legal measures, including the initiation of constitutional  amendments, the holding of a national referendum. According to the  head of the government, the works will be carried out in accordance  with the best international experience, within the framework of  international commitments of Armenia and in cooperation with  authoritative international structures in this field, as well as with  the civil society of the republic and the expert community.

This agenda, as pointed out by Pashinyan, has long been discussed  with representatives of the UN, OSCE, IMF, CE, EU, WB. In this  context, the Prime Minister expressed the hope that Armenia's  international partners would support the implementation of reforms.  "Our goal is to abandon puppet courts and ensure the functioning of  the judicial system based on the rule of law in accordance with  international best practices," he said.

In addition, according to Nikol Pashinyan, there are forces in  Armenia that continue to adhere to the old traditions - they sow  enmity between the peoples of Artsakh and Armenia within the  framework of the logic of divide and rule and with the aim of  concealing their past corruption crimes. "It is obvious to everyone  that our compatriots in Artsakh may have suffered more from systemic  corruption in Armenia, but at the same time it is clear that some  officials of this system, using their corrupt connections, are making  efforts to spread false information about the Prime Minister of  Armenia in Artsakh, "he noted.

Analyzing the above, the Prime Minister of Armenia considers that  behind all this stands the desire to initiate conspiracy around the  war, by surrendering a number of territories with further imposition  of responsibility on the government of Armenia. Nikol Pashinyan  called such activity treason.

As the security guarantor of Artsakh, the Supreme Commander in the  military time, Nikol Pashinyan is ready to take tough measures to  suppress such inclinations in the bud. In this context, the head of  the RA government believes that the time has come for setting up a  special commission in parliament to study the circumstances of the  April 2016 war.

"Changes in Armenia are irreversible," Nikol Pashinyan said. The  author of these changes, as he pointed out, is not a separate  political force, but the entire Armenian people - a proud citizen of  Armenia. "All those who live by senseless pitch to throw Armenia into  the past, act against the people of Armenia, Artsakh and all  Armenians. The revolution of love and solidarity triumphed over  corruption and the latter must capitulate," he said.

According to the head of government, there is no place for such a  judicial system in Armenia whose interests do not stem from the  interests and will of the people. Pashinyan reminded that Article 2  of the Armenian Constitution clearly states that the supreme power in  the country belongs to the people, who exercise it through free  elections and a referendum. "Consequently, there is no place for such  an authority in the country, including a judicial one, which does not  represent the interests of the people," the prime minister said. To  ensure the rights of the people, as the supreme sovereign power in  the country, according to Pashinyan, he will resort to various  measures, up to the appeal to the direct support of the people. "The  goal of these measures is to ensure that there is no such judicial  system in Armenia that does not enjoy the confidence of the people,"  Nikol Pashinyan concluded.