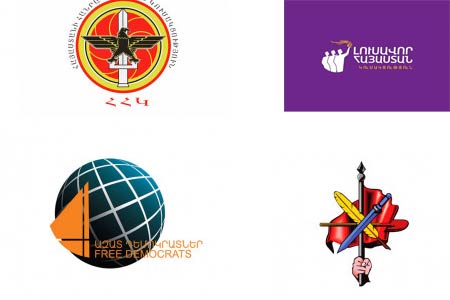 ArmInfo. In connection with the call of Prime Minister Nikol Pashinyan to block all entrances and exits to the courts, the political parties of Armenia made statements.

In particular, representatives of the previously ruling Republican  Party of Armenia condemn the appeal of the Prime Minister, believing  that this is the pressure and oppression of the judicial system.  According to representatives of the Republican Party of Armenia, the  constitutional order in the country is threatened, as well as the  basis for the separation of branches of power - the executive  legislative and judicial, as well as the rights of others. "Such a  method will damage the justice system and the judiciary. The RPA  urges citizens not to take part in the action initiated by Pashinyan,  and the Government, civil society institute and public figures to  join in condemning actions that could lead to the collapse of the  state system," RPA representatives conclude.  .  In turn,  representatives of the ARF "Dashnaktsutyun" party condemn the growth  of hated statements in the country, and the division of society into  black and white. Representatives of the party are concerned about the  growth of intolerance and believe that these manifestations are an  obstacle to the development of democracy and state institutions in  the country. "ARF Dashnaktsutyun calls on the country's leadership  and law enforcement representatives to show political will and in the  shortest possible time to guarantee the unhindered activity of  government structures." ARFD considers the Prime Minister's call as a  step against the constitutional system and the judicial system of  Armenia, considering it adventurous. We urge all political parties to  contribute to the preservation of peace in the country, the judges  not to succumb to this pressure, and urge the president to monitor  the observance of the Constitution, " ARF representatives concluded.

Representatives of the Bright Armenia Party called on the Prime  Minister "not to make a gift to Robert Kocharyan" and it is not too  late to abandon his idea to block the entrances and exits of the  courts. The Party notes that this is a violation of justice and the  constitutional rights of citizens. Also, representatives of the party  call on parliament speaker Ararat Mirzoyan to convene an  extraordinary meeting tomorrow to discuss the current situation. The  "Bright Armenia" party calls to refrain from any anti-constitutional  steps.  The statement notes that party representatives are supporters  of the rule of law and the observance of constitutional order in the  country. They are ready to discuss all the problems existing in the  judicial system of Armenia, as well as to find legal solutions,  however, they urge everyone to refrain from anti- constitutional  steps that are a blow to the statehood of the country and the  protection of human rights. "We urge the Prime Minister to cancel his  appeal and not to impede the activities of the courts, thus not  jeopardizing the country's international reputation. Moreover, we  urge not to divide the society and try to solve the real deep-seated  problems in the judicial system in an atmosphere of tolerance and  mutual understanding ", the representatives of the Bright Armenia  emphasize.  In turn, representatives of the Free Democrats Party  stressed that one of the guarantees of state development is  independence of the judiciary. "The new government in Armenia had  enough time to evaluate the work of the legislative, executive and  judicial authorities in the country, and to implement structural  reforms in these areas. The fact that Armenia does not have  confidence in the judiciary and the law enforcement system is not  new. However, no steps were taken to solve the problems in the field  of justice in the country. Representatives of the Free Democrats  Party urge the Armenian authorities to move from statements to  effective steps towards the reform of the judicial and other branches  of government. The Prime Minister's call is not a step towards  reform. We are convinced that the process of forming the judiciary  should take place solely by legal means, and having an absolute  majority, the Prime Minister should start a social and political  dialogue. Besides the legal path, all other ways are not only  unacceptable, but contain a number of dangerous factors that may  affect the international rating of our state and the activities of  the judicial system, " the Free Democrats conclude.

To note, yesterday the Prime Minister of Armenia Nikol Pashinyan made  an appeal to the citizens of the republic to block the entrances and  exits of all the courts. "From 08:30 am on May 20, we block the  entrances and exits of all courts in the republic without exception,  so that no one can enter," he wrote on his Facebook page, adding that  tomorrow at 12:00 the second , most important stage of the Armenian  revolution will start, and that he will make an important statement  about the situation in the judicial system.  The Defender of Human  Rights, the Chamber of Lawyers, the High Council of the Judiciary and  a number of political parties have already spoken against this call  of the Prime Minister. The situation was also commented on by  Armenian President Armen Sarkissian and Catholicos of All Armenians  Karekin II.