US Ambassador to Armenia Lynn Tracy reports her 2.5 months in Armenia 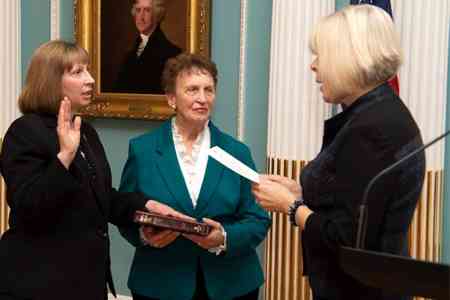 Thus, on May 15 in Yerevan, summing up the first meetings in Yerevan,  she stated that it was a great honor for her to be in Armenia and  stated that she had a fairly intensive start of work, many meetings  were held with representatives of the state apparatus, civil society,  and students. According to her, all these meetings helped her to  personally understand the full breadth of bilateral relations.

She recalled the strategic dialogue between Armenia and the United  States held last week in Yerevan, which reaffirmed the commitment of  the parties to continue cooperation and was marked by the signing of  two agreements, which allows Washington to increase its financial  assistance to the Armenian side by $ 16 million. "We also launched a  new USAID initiative in support of the program of democratic reforms  in Armenia. We will work out the details of this initiative in  consultation with interested parties, but in general we intend to  offer technical assistance to the government and help expand economic  opportunities for Armenia," the US ambassador said.

However, according to the diplomat, this is not all, and the dialogue  last week demonstrated the commitment of the United States to promote  a transparent, fair and independent criminal justice system in  Armenia, as evidenced by the opening of the Armenian-American  friendship corridor at the Academy of Justice of Armenia.

According to her, the United States has consistently supported the  democratic process in the Republic of Armenia since the establishment  of diplomatic relations 27 years ago. "I don't need to tell you that  today democracy in Armenia is stronger than ever. And as the events  of last spring showed, the changes begin with the Armenians and are  caused by them. It's the Armenians who flooded the streets last  April. They were Armenians all over the country to the streets and  demanded the fulfillment of the right to live in a free and  democratic country, the right to live in a country where government,  civil society and business work freely, honestly and transparently to  create a more prosperous future for all. And although I am proud that  United tats were the first foreign country to assist in the conduct  of elections after the events of last spring, it was the people of  Armenia who exercised their right to vote in free and fair democratic  elections last December, "the diplomat said, stating her intention to  continue to support the Armenian people, who chose to develop and  strengthen democracy, the rule of law and the protection of human  dignity.

At the same time, she added that she was inspired by the efforts of  the Armenian government to eradicate corruption and ensure  transparency. Tracy is convinced that this is important in view of  the presence of serious potential in Armenian-American relations in  terms of strengthening trade and investment ties, attracting  investments and developing the economy.