Municipality: Unfinished sections of the Cascade must be completed by  its owner, or sold to a new developer. 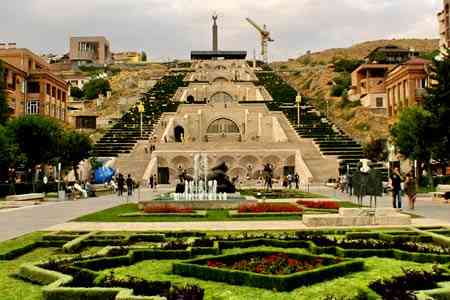 ArmInfo. Unfinished sections of the Cascade must be completed by its owner, or sold to a new developer. This opinion was expressed at a meeting with journalists by the chief  architect of Yerevan Artur Meschyan."After the death of Cafesjian,  the territory of the Cascade has its representatives, and the most  difficult thing for us now is to find someone with whom we will  directly negotiate on the issue of development.

If the successors of Cafesjian do not intend to build up the remaining sections of the  Cascade, they should be sold to the new developer, who will  eventually give the final look to the Cascade, "Meschyan said,  calling the situation with the unfinished construction for several  years impermissible and terrifying, not to mention that the Cascade  and the surrounding areas are covered with a cloud of dust during  strong gusts of wind.

<Few days earlier I met with architect Aslan Mkhitaryan, he presented  to me a very good project on building up the Cascade, but we frankly  said that the local budget does not have funds for its  implementation. If we manage to sell part of the Cascade's territory  to a new developer, who will assume construction costs, he will have  to repair the area adjacent to the Monument. Thus, the Yerevan  Municipality forms a certain tendency, if the developer does  something based on his own interests, he also undertakes additional  work for the benefit of the city, "Meschyan said. According to him,  Cascade is a priority for the city, so the completion of its  construction is of paramount importance.