Meschyan: Municipality does the maximum that is in its power to solve  the problems of the capital 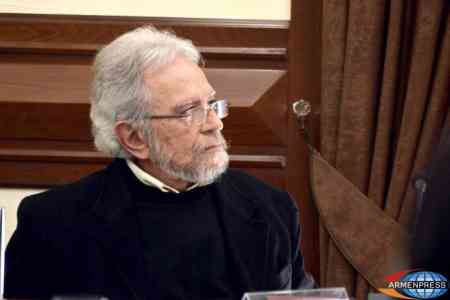 ArmInfo.Recently, quite serious but often biased accusations have been heard against the Municipality,  chief architect of Yerevan Arthur Meschyan  said at a press  conference.

<Quite actively discussed, allegedly unprofessional and  unsuccessful work of the Municipality. There are talks that  everything is cut with a sharp knife without taking into account the  situation and conditions. This discontent also applies to the issue  of increasing wages and investment policies, which we allegedly  impede by delaying building permits. That is, quite serious  accusations are being addressed to us, "said Meschyan, assuring that  the Yerevan mayor's office is doing everything within its powers, but  they are simply unable to do anything more.

To accusations about the lack of systemic changes, Meschyan responded  with the absence of a corresponding legislative base. "Systemic  changes do not fall from the air, and in terms of the legislative  field, we are in a rather sad state," the architect explained,  citing, as an example, the situation of the outbuildings attic, the  demolition of which requires 100% consent from the residents of the  houses. He noted that work in this direction did not begin due to the  impossibility of collecting signatures of the residents of these  houses. "Therefore, we propose to change the law and reduce the  threshold of required signatures to 2/3>," he added.

He also touched illegal garage buildings and stalls, warning that  sooner or later these buildings will be demolished: <The function of  the chief architect is to say <no> illegal actions, and to say <yes>  to the right and reasonable steps>. Meschyan also noted that from  next week the town-planning council will operate, and the most  important projects without work and discussions with the council will  not receive a positive conclusion.