Deputy Minister: With the consent of a number of officials, the  territory of Amberd Fortress in 2013 was withdrawn from the zone of  protection of the cultural heritage object 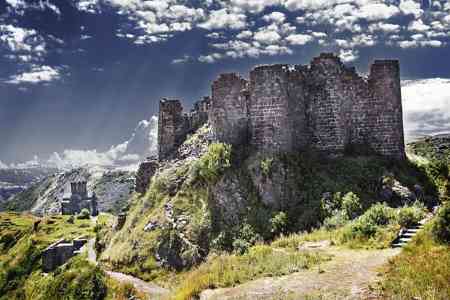 ArmInfo.With the agreement of a number of officials, the territory of Amberd fortress in 2013 was withdrawn from the zone of protection of the cultural heritage object. This was announced at a press conference on May 2 by the Deputy Minister of  Culture Tigran Galstyan, referring to the construction work-taking  place near the protected area of the historical and cultural reserve.

In this connection, as Galstyan explained, the Ministry of Culture  appealed to the prosecutor's office to find out why the protection  zone of Amberd and its surroundings changed. As Galstyan noted,  construction work has now been suspended.

Galstyan assured that a request was sent to the prosecutor's office  to clarify the circumstances on which the grounds of the monument  were excluded from the protected area. In this regard, they are  waiting for clarification from the Research Center for the  Preservation of Cultural Heritage.

The deputy minister admitted that at the end of 2018 he was informed  about the project for the construction of the facility, but since the  territory was in fact not a specially protected area, the ministry  did not have the authority to draw any conclusions or give permission  for its construction. He only admitted that it seemed to the Ministry  very strange why the site adjacent to the monument is outside its  zone. At this, the actions of the authorized department were limited,  and only after the hype rose in the media and social networks, the  Ministry suddenly took certain steps, in addition to the expression  of surprise. It turned out that the department still has the  authority to apply to the Prosecutor General's Office.  To note, the  list of officials who signed the agreement to change the fortress's  territory includes: the head of scientific expeditions Hakob  Simonyan, former deputy minister of culture Arthur Poghosyan, former  governor of Aragatsotn region Sargis Sahakyan,  head of Orgovi  village Araik Manukyan.

<We have the right to prohibit construction work if the historical,  cultural layers of the monument are violated, and taking into account  the fact that fragments of ceramic utensils and human bones were  found in the dug-out area, we can say - there were violations, but we  must wait for the decision of the prosecutor's office> - he said,  stating that the owner of the privatized territory is a certain Sirak  Manukyan, the father of whom is the head of the Aragatsotn regional  branch of <The security service of the cultural-historical  reserve-museum me and the cultural environment> SNCO Manuk Manukyan.

He previously explained that the plot of 2000 square meters was  purchased in 2017 for 8 million drams.  Galstyan also noted that it  is premature to talk about the existence of corruption schemes and  abuse of official powers, stating that the Ministry of Culture does  not have the authority to dismiss Manuk Manukyan, urging the public  to wait for the reaction of the prosecutor's office.  In addition,  the Deputy Minister stressed that the construction work does not have  a master plan, and a food supply point nearby is not included in the  project plan.