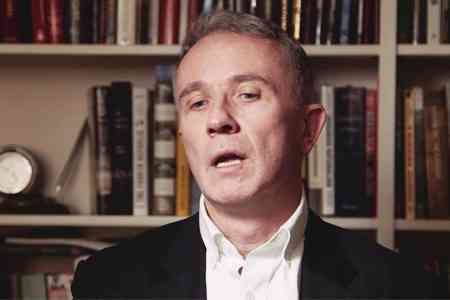 ArmInfo. Armenian Prime Minister Nikol Pashinyan should start working and stop <playing politics with the United States, blaming the states>. Senior  Associate at Carnegie Foundation Paul Stronski wrote about this on  Twitter, commenting on Pashinyan's criticism of the United States.

The expert notes that Washington was unhappy with the policies of  Kocharyan and Sargsyan, and therefore suspended funding for the  Millennium Challenge program. Meanwhile, according to him, Washington  significantly increased its assistance to Armenia after the change of  power. <Unlike the EU, the United States during the last 6 months  provided Armenia with $ 14 million in additional funding. In fact,  last year the United States provided $ 25 million to Armenia - more  than ever since 1992. Washington is ready to provide more as soon as  the Pashinyan government decides on priorities and programs,  "Stronski wrote.

Referring to the humanitarian mission of the Republic of Armenia in  Syria, the expert noted that Washington understands Yerevan's  interest in view of the presence of the Armenian community in this  country. "However, finding Armenian sappers in Syria along with  Russian ones is a big question for the United States," Stronski said.

According to the expert, Armenia, Kazakhstan, Kyrgyzstan and Belarus  for a long time resisted the pressure of Russia to send forces to  Syria, but so far Armenia is the only country that agreed to this. He  noted that these sappers were once trained by American specialists as  part of the demining program of Armenia. <This is part of the $ 1  billion aid provided to Armenia. Therefore, sending Armenian sappers  under the auspices of Russia to Syria is particularly negatively  perceived in the US, "Stronski said.

To note, in an interview with the "RKB", Pashinyan stated that not a  single government of Armenia so mercilessly criticized the United  States as it did. We also note that the sending of the Armenian gum  mission to Syria under the auspices of Russia caused sharp criticism  by the United States.