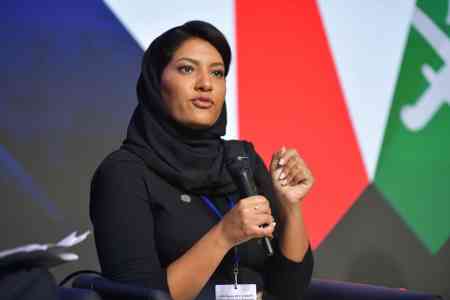 ArmInfo. The Ambassador of Saudi Arabia to US Princess Reema bint Bandar Al Saud during a meeting with Chair of the House Intelligence Committee, member of  Democratic party Adam Schiff expressed readiness to provide financial  assistance to the resolution of Armenian Genocide, which was  presented to the Congress several weeks ago.

According to Adam Schiff's website, during the two-hour meeting, a  wide range of issues on the bilateral agenda, investment projects of  Riyadh in California were discussed. "In addition, Schiff presented  to the Saudi princess the resolution on the Armenian Genocide, which  was presented to the US Congress in March and requires recognition of  the crime and its conviction. At the suggestion of Senator Schiff,  the Saudi Ambassador to the United States agreed to provide financial  support for the resolution," reads the message.

Reema bint Bandar Al Saud noted that Saudi Arabia was also under  strong oppression during the Ottoman Empire, and there are no  pleasant memories from the history of the Ottoman rule. "Our country  has always focused on the protection of human rights.  Investigating  historical events is the right of every nation, and no one should  worry when the truth turns out. Turkey is the main accused of the  Armenian Genocide, and cannot demand concern for the protection of  rights and fundamental human freedoms until the truth is  ascertained'', the Princess said.  The Saudi Ambassador also promised  Adam Schiff that she would take advantage of her opportunities and  lobbying for the adoption of this resolution in the US Congress.   "The policy of Turkey in recent years has always been a concern of  Riyadh, and we believe that the panosmanism of Erdogan and the  Justice and Development Party contradict the interests of Islamic  countries, especially Arab ones," the Princess emphasized.  Adam  Schiff and Gus Bilirakis (Republican Party) previously submitted to  Congress a resolution on recognition by the United States of the  Armenian Genocide in Ottoman Turkey in 1915-1923.

A report published on Schiff's website also suggests that the Saudi  ambassador's support for the resolution is Riyadh's diplomatic  response to Turkey's actions in connection with the murder of a  prominent Saudi journalist.  It is noteworthy that there are no  diplomatic relations between Armenia and Saudi Arabia.