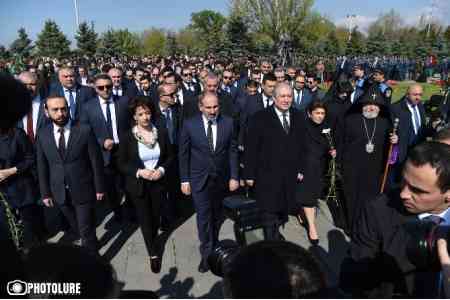 ArmInfo.Armenian Prime Minister Nikol Pashinyan and the President of the Republic Armen Sarkissian visited the Tsitsernakaberd memorial complex in Yerevan on April 24, where they honored the memory of the victims of the Armenian  Genocide.

At the Eternal Flame, the Catholicos of All Armenians Karekin II,  served the requiem service, the people bowed their heads and honored  the memory of one and a half million killed Armenians with a minute  of silence.