Armenian President: Impunity of the Armenian Genocide opened the door  to subsequent serious crimes against humanity and new genocides 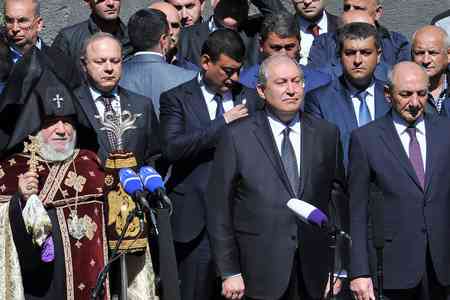 ArmInfo.Armenian President Armen Sarkissian sent a message in connection with the Day of Remembrance of the Victims of the Armenian Genocide of 1915, the press service of the president informs.

According to the source, the message reads, in particular: "Today,  the entire Armenian people, together with the advanced humanity on  all continents of the world, honor the memory of the victims of the  Armenian Genocide.

April 24 is the day of memory of the innocent victims of the Armenian  Genocide organized and carried out at the state level in Ottoman  Turkey at the state level. This is the day of commemoration of the  tragedy of our numerous compatriots who were subjected to violence in  their historic cradle and compatriots expelled from their native  land. This is a day to once again recall the spiritual, material and  cultural values we lost, once again announce to the world the gravest  crime against humanity - genocide, call for a sober assessment and  fight against denial, "the president noted.  Sarkissan stressed that  April 24th is not only a memorial day for us, but also a day of  resurrection.

"The impunity of the Armenian Genocide opened the door to subsequent  serious crimes against humanity and genocides. Let's recall the  Holocaust, Cambodia, Rwanda and other tragedies.  This should be a  lesson of vigilance for all. International recognition and  condemnation of this terrible crime committed against humanity should  be an important step in order to prevent its recurrence anywhere in  the world.  We express our gratitude to all those states,  international structures and organizations, spiritual shepherds and  political leaders, cultural figures, representatives of academic and  scientific circles, individuals who express their solidarity with the  Armenian people, recognize and condemn the Armenian Genocide, "said  Sarkissian.  At the same time, the president noted that today, bowing  our heads in front of the memory of the Holy Martyrs, we are at the  same time testifying to our unbending will to survive and rebuild our  Homeland.  "The duty of the heirs who survived, our duty is to rally  around our national aspirations, to remain true to our identity and  our values, to stimulate the creative force of the people, to create  a dynamically developing modern Armenia, which will be a source of  pride for all Armenians of the world and will be able to protect the  enduring rights of the Armenian people'', the President of Armenia  concluded.