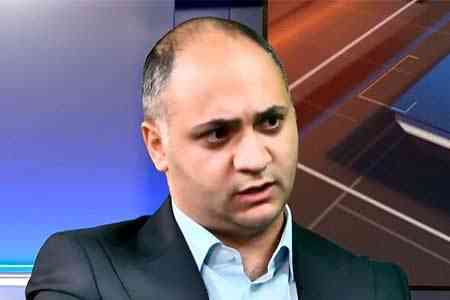 ArmInfo.At its meeting on April 19, the National Assembly of Armenia began discussions on the candidacy of the chairman of the State Commission for the Protection of Economic Competition. The Prime Minister of the Republic of  Armenia submitted the candidature for the post of Acting Minister of  Agriculture Gegham Gevorgyan.

Speaking about the priorities of his activities as head of the SCPEC,  Gegham Gevorgyan noted the need to conduct research to identify price  collusions, violations of the antitrust position, market abuse. He  stressed that one of the directions of SCPEC activity will be to  study the situation in the field of air transportation. For example,  it is necessary to make comparisons between the prices of air tickets  with the services of airports. Everything will be explored - from  plane meals to airline policies. Gehgam Gevorgyan does not promise a  quick resolution of this issue, but he assures that this issue will  receive the closest attention.

Speaking about monopolies, the candidate for the commission's leaders  emphasized that the SCPEC's task should not be to identify them, but  to exclude abuses in the market. The Commission must strive to ensure  that those who have monopolies or occupy a special place in the  market do not abuse their position. That is, it is permissible to  have a dominant position in society, but within the framework of the  law. No one is going, for example, to fight with natural monopolies.  Moreover, the candidate continued, it is quite possible that as a  result of fair competition a new monopolist will appear in the  market. "It's another thing if a particular subject begins to abuse  its position in the market. One of the ways to solve this issue is to  involve the maximum number of participants on the market," Gegham  Gevorgyan said.

He also assured that the work of the commission will be completely  independent, and is accountable exclusively to parliament and the  public. He noted that important achievements could be made in this  area.