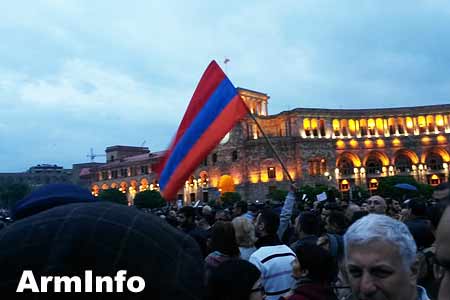 ArmInfo.124 million AMD (about $ 255 thousand) will be allocated from the reserve fund of the Armenian government to hold events dedicated to the "Citizen's Day".

To recall on March 21, the Cabinet of Ministers approved amendments  to the law "On holidays and anniversaries", which propose to  introduce a new holiday - Citizens Day, which will be celebrated on  the last Saturday of April. At the same time, if May 1 falls on  Saturday, then Citizen's Day will be celebrated on the previous  Sunday of April in order to exclude the possibility of celebrating  Citizen's Day on the day of memory of the victims of the Armenian  Genocide in the Ottoman Empire - April 24.

As noted in the government's decision, one of the results of the  national movement was the resignation of Prime Minister Serzh  Sargsyan and the victory of the national movement on April 23, 2018  on the wave of civil disobedience actions held in Armenia by the  former president, Prime Minister Serzh Sargsyan announced his  resignation. On the same day, Armenian President Armen Sarkissian  accepted the resignation of the government. The parliament at a  special meeting on May 8, at the second attempt, elected the leader  of the Armenian opposition Nikol Pashinyan to the post of Prime  Minister. On this day, national holiday celebrations took place in  the country.