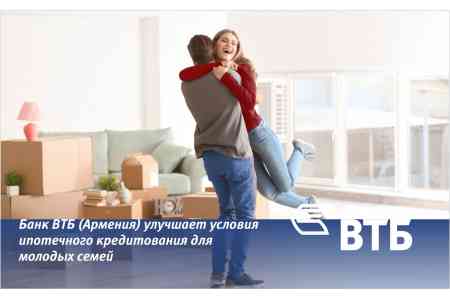 ArmInfo. VTB Bank (Armenia)offers to purchase real estate under the new improved conditions of mortgage lending under the program "Housing for the Young."

This was reported to ArmInfo in the press service of the bank.Now  buying an apartment in Yerevan and in the regions is much easier  andmore profitable, because under the new conditions of this program:  the size of the minimum prepayment is reduced to 7.5%; the  requirement for the age of each spouse has been removed and there is  only a limit on the total age of spouses - 70 years;

Detailed information about the conditions of the program "Housing for  young people" can belearn at the branches of VTB Bank (Armenia), on  the official website www.vtb.am and at the Bank's Contact Center at  87-87.According to the Financial Rating of Banks of Armenia as of  December 31, 2018,prepared by the ArmInfo Investment Company, the  mortgage portfolio of VTB Bank (Armenia) exceeded 12.5 billion drams  or $ 25.9 million, with the annual dynamics coming out of recession  to growth, and only in IV quarter it was possible to ensure an  increase of 10%. In the total loan portfolio of the bank, the share  of mortgage loans is 6%, and in the total mortgage loans of the  banking system the share of VTB Bank (Armenia) is about 5%.

It should be noted that VTB Bank (Armenia) CJSC became a member of  the internationalfinancial group VTB in April 2004. Currently, the  second largest in Russia, PJSC "Bank VTB" owns 100% of VTB Bank  (Armenia) shares. The Bank traditionally ranks among the leaders of  the banking system of the Republic of Armenia by major indicators.  The branch network of VTB Bank (Armenia) covers 70 divisions with a  presence both in the capital and in all regions of the country.   Moreover, both in the total number of branches and in the number of  regional branches, the Bank retains its leadership, occupying the  second position in the number of capital divisions.