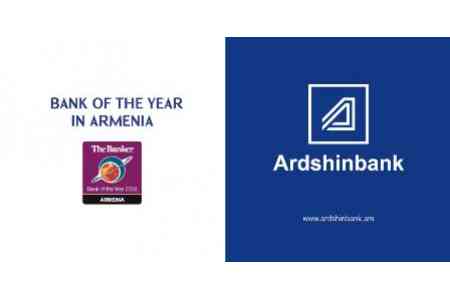 ArmInfo.Ardshinbank extended the deadline for accepting applications for amnesty of fines / penalties for bad loans until October 1, thereby providing borrowers  with additional time to restructure and refinance debt. As ArmInfo  explained in the press service of the bank, it is a question of  retail loans without collateral classified as bad as of May 31, 2018.

The terms of refinancing such loans and amnesty fines and penalties  can be found on the Ardshinbank website at  https://bit.2/2mcDLbSArdshinbank was one of the first banks to start  implementing the government initiative on the amnesty of fines and  penalties on uncollectible loans to individuals. Namely, on July 7,  2018, the bank announced its readiness to accept applications for  restructuring and refinancing such loans. Recall that July 2, 2018.  The Prime Minister held a meeting with bankers in the government of  the Republic of Armenia in order to practically address the issue of  concessions of fines and penalties for problem loans. On the same  day, ACBA-Credit Agricole Bank and Ameriabank announced the  cancellation of fines and penalties on hopeless loans to individuals,  then IDBank (July 4) and Ardshinbank (July 7) announced about joining  this process, and the rest of the banks were also involved in this  process.

The bank has increased the volume of consumer loans in annual terms  by 47%. In its report on the classification of the loan portfolio by  risk groups, the bank does not indicate the amount of bad loans. 2018  Ardshinbank completed with a net profit of 8.2 billion drams ($ 16.98  million, 2nd position), with an annual growth of 48.6%. In terms of  income from loans, the Bank holds the 2nd position, increasing their  share in total revenues to 51%.Note that Ardshinbank was founded in  2003. The majority shareholders of Ardshinbank as of January 1, 2019  are Arins Group LLC (formerly called Business Investment Center LLC)  with a 67.97% share in the capital and REGION Industrial and  Financial Corporation CJSC - 29.52%. Ardshinbank is the second  largest bank in Armenia, having one of the largest branch networks,  with 64 branches. Ardshinbank was assigned credit ratings of two  international rating agencies (Moody's and Fitch), equal to the  country rating of Armenia.