At this moment, NSS armed officers conduct a search in the mansion  and office of former MP Mihran Poghosyan 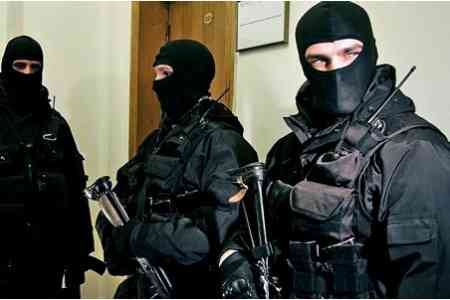 ArmInfo.At that moment, armed officers of the National Security Service of Armenia broke into the mansion of the former head of the Judicial Acts Compulsory  Enforcement Service, former lawmaker Mihran Poghosyan and carried out  a search there. This is stated in the message of the Poghosyan  office.

To note, after Vanetsyan's statement that the National Security  Service was informed about Poghosyan's whereabouts abroad, the former  head of the Compulsory Enforcement Service made a statement in which  he noted that the special services were of course informed about his  whereabouts, since he himself had informed them about it. In his  statement, Poghosyan has already publicly indicated the specific  address of his residence in Moscow.

To recall, Mihran Poghosyan is accused of abuse of power and theft of  property on a large scale. According to the prosecution, Mihran  Poghosyan, from  June 11,2008  occupying the position of chief  enforcement officer of the judicial acts of the Republic of Armenia,  appointed the person who ensured his personal safety as the first  category consultant of the  compulsory enforcement department, while  his personal driver was appointed the leading adviser of the same  department.

They did not attended work, instead they carried out personal orders  of Mihran Poghosyan, however they received a total of salary and  bonuses in the amount of 44,199,463 drams.

In addition, Mihran Poghosyan, using his official position, concluded  contracts for the purchase of goods and the provision of services  with organizations managed by himself through proxies. Thus, during  2011- 2016 using the state funds entrusted to him for the needs of   Compulsory Enforcement Service, Poghosyan purchased 32 BYD cars with  a total value of 211.158.000 drams from the Ketrin Group company,  founded by him. Moreover, according to the NSS, 20 out of 32 cars  were purchased at a price of 20,000,000 drams higher than the real  value of their sale, as a result of which property damage in  especially large amounts was caused to the legitimate interests of  the state.

Moreover, in 2011, Mihran Poghosyan, through the citizens of foreign  countries, founded the business companies Hopkinten Trading  Incorporated and Sigtem Real Estate Incorporated in Panama, and in  October of the same year instead of foreign directors of companies  with his direct participation in relevant positions appointed persons  close to him. Then Mihran Poghosyan participated in the management of  the aforementioned organizations registered in the Panamanian  offshore zone through trustees, as a result of which the latter  founded other companies in Armenia, including Best Realty LLC.

Mihran Poghosyan, taking advantage of his office, and providing  benefits and preferences, protected the above mentioned organization,  actually managing it from April 2014, concluded in 2014-2016 an  agreement on real estate and movable property evaluation with the  Compulsory Enforcement Service he headed, as a result 43.890.000 AMD  was paid out by the Service to the indicated organization.  To note,  in response to the NSS statement about the initiation of the case  against Poghosyan, yesterday his office he made another statement, in  which it was noted that the current authorities had tried to force  public to believe in legend that there are 800 mln USD on Poghosyan's  accounts, and so far in vain. The Office recalls in an offshore  scandal, the case was started under the previous authorities. And  then, and now, the same investigator held  the case, and after a year  of investigation of the crime, he never found it. And it turns out  that $ 800 million attributed to Poghosyan is a fiction that was  aimed at denigrating his name and reputation. For a long time, the  public was told that hundreds of millions of dollars had accumulated  as a result of offshore operations on Poghosyan's accounts.  Meanwhile, the same International Bank, allegedly involved in these  operations, denied this fact. However, this important circumstance  was ignored. And today, not finding anything in the framework of the  "offshore scandal", MihranPoghosyan was credited with a new  accusation - wasting several million drams, Pogosyan's office notes,  adding that the current authorities are aiming not to achieve  justice, but to ascribe charges to him at any cost.  At the same  time, the Poghosyan office  emphasizes that Mihran Poghosyan will  fight for the restoration of justice by all legal means.