Opposite the Armenian parliament, an action in defense of national  values is taking place: the cleric wants to illuminate the NA hall 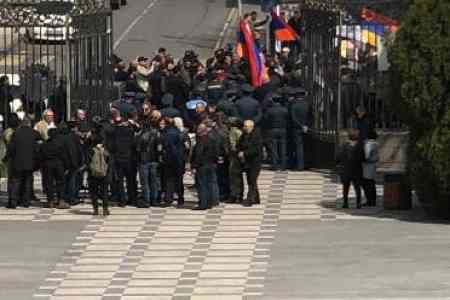 ArmInfo. From the very morning, a  protest rally in defense of national values is taking place opposite  the Armenian parliament.

As one of the organizers of the action, coordinator of the  "Kamq"(will, Ed. note) initiative, Vahagn Chakhalyan, said, the rally  participants are outraged that the transgender spoke from the podium  of the National Assembly of Armenia. He stressed that the protesters  want to understand who allowed the transgender to get into parliament  and on what basis.

The priest Ter-Ghazar also took part in the protest. He noted that  they want to enter the parliament building and illuminate the meeting  room, fumigated with incense. However, this idea alarmed the  vice-speaker of the National Assembly Alen Simonyan, who came to the  protesters, who tried to explain that in this case the fire-fighting  system would work, and water from above would be poured on the MPs.  But this even more inspired Ter-Ghazar, who had a clear vision of  God's work, because in this case, the meeting room, which, according  to the priest, was desecrated after a transgender speech, cleansed  with water and sacred incense. Having surrendered, Alain Simonyan  promised Ter-Ghazar to clarify whether smoking incense is possible in  the meeting room of the parliament, and if it turns out that it is  possible, the clergyman will surely fulfill his mission.

Meanwhile, within the NA itself, the MPs themselves actively  discussed this topic. Thus, the leader of the Prosperous Armenia  Party, Gagik Tsarukyan, speaking to journalists, referring to the  speech of a transgender person Lilit Martirosyan in parliament, said:  "This is unacceptable for us, this is a defect, it must be kept  secret. I say this as Gagik Tsarukyan, as the father of the family,  as a political leader. We will not allow it to spread or gain legal  force. At the same time, he noted that each person can protect his  rights, and if there is a problem, he should appeal to law  enforcement authorities, but it is impermissible to adopt a new law  encouraging this phenomenon.