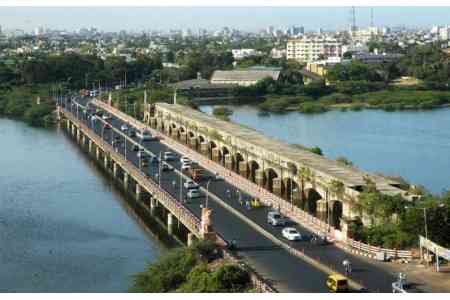 ArmInfo. In India restored a memorial stone of Armenian culture, dedicated to the history of the famous Armenian Bridge of Madras.

As the press service of the Armenian Foreign Ministry told ArmInfo  the monument, in which three languages (Latin, Persian and Armenian)  tell about the history of this famous bridge, was restored thanks to  the efforts of the Armenian embassy in India. "At the request of the  Armenian Embassy and under the patronage of the Armenian Consulate  General in India, the memorial stone was saved. The cemented part of  the Armenian record was fully restored. Moreover, the memorial stone  is now erected on a pedestal, which ensures not only its  preservation, but also made it more visible to passersby." - reported  in the RA MFA.

To note, the multi-arch Maraimalai Adigal Bridge  was built by  Armenian merchant Khoja Petros Voskan back in 1726. The bridge was  one of the attractions of the city, which came to see and which was  captured in the paintings of manyartists. Over the centuries, this  bridge has connected two parts of the city Chennai (Madras).