Protest action  in support of Konstantin Orbelian is held outside the  government building in Yerevan:  Pashinyan listened to culture  persons 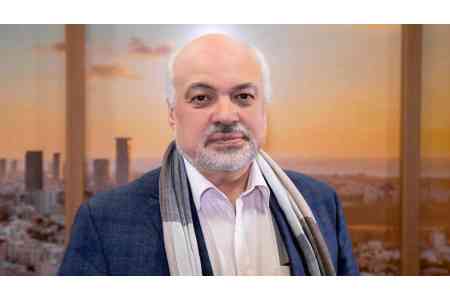 ArmInfo.Employees of the Academic Opera and Ballet Theater of Armenia. In the morning, Spendiaryan began a protest action outside the government building of the  republic. They demand that the order be canceled. Minister of Culture  of Armenia Nazeni Garibyan on the dismissal of the director of the  theater Konstantin Orbelian. Culture workers were received by Prime  Minister Nikol Pashinyan.

At the beginning of the protest, the protesters announced that they wanted to send a letter of appeal to the Prime Minister stating that the order to the Acting President.  Minister of Defense to relieve Konstantin Orbelian from the post of  Director of the Opera and Ballet Theater and the plan to "optimize"  the theaters filled the cup of patience of the theater world.

The letter noted that the Ministry of Culture only hindered the  activities of theaters, as well as the law on GNCO. According to  theatrical figures, a person who believes that "opera is not a  theater," and artistic director's position is not creative, and so  on, cannot be headed by the Ministry of Culture. As a result, they  demand the resignation of Nazeni Gharibyan and adequate cultural  policies. The protesters point to the disrespectful attitude of  Garibyan towards culture and its leaders, which contradict the laws,  orders and orders signed by it. As one of the employees of the  theater said, they are not protesting against a particular person,  but only care about the prosperity of the theater, which in the past  year and a half has developed rapidly. "As for the explanations of  the Ministry of Culture that Orbelyan does not speak Armenian (which  is a violation of the law), I must say that it is even a shame to  talk about this, the music does not know the language," he said.After  the meeting with the prime minister, the theater staff said that a  temporary decision was made. Namely, the obligations of the director  of the theater will be temporarily assigned to the deputy director,  and Konstantin Orbelian will perform the functions of artistic  director. During this period, artists will have to submit their  counter-arguments to the cabinet.

According to opera singer Liparit Avetisyan, they are fighting  against the system, and not just a person.  "The question is that we  are fighting not against the face, but against the system according  to which all the controls are in the hands of the director. In the  theater, this interferes with creative life",- he said.A spokesman  for the Prime Minister, Vladimir Karapetyan, in turn, said that the  demands of the staff of the Opera and Ballet Theater would be heard  and relevant decisions made on the spot. Recall that the Acting  Minister of Culture of Armenia, Nazeni Gharibyan, by decree of March  28 of this year. relieved Konstantin Orbelian of the post of Director  of the National Academic Opera and Ballet Theater named after A.   Spendiaryan. As the basis of K. Orbelyan's release from office, the  Ministry of Culture cites article 15 of the Law of the Republic of  Armenia <On state non-profit organizations>, which states: <A person  appointed to the position of director of SNCO may not occupy another  position or perform other paid work than scientific , pedagogical and  creative work. Konstantin Orbelian, besides the director of the  National Academic Opera and Ballet Theater named after Alexander  Spendiaryan, also held the position of artistic director.As Orbelyan  himself stated in an interview with journalists, the team of the  Opera and Ballet Theater will appeal the decision about the  resignation of the theater director Konstantin Orbelian in court.  At  the same time, he noticed that. RA Minister of Culture Nazeli  Gharibyan did not inform him in advance about his decision. "We  received this decision today in writing," Orbelian said. According to  the ex- director, Garibyan has been trying to wipe him off his post  for 9 months now.

"She offered me to quit myself, but I refused. My contract as  director of the Theater expires after 1.5 years, that is, very  weighty justifications are needed for my dismissal. I consider the  decision of Garibyan illegal and it will be appealed in court,"  Orbelian. On the same day, March 29, Garibyan announced that the name  of the new director of the Opera Theater will be known on April 1.  Orbelian himself stated that in this case he would leave the theater  altogether.Orbelyan, along with a brilliant pianist career, has also  developed a wide range of activities in the opera field as a  conductor and artistic director. In particular, in 1991-2009 he was  artistic director and chief conductor of the State Academic Chamber  Orchestra of Russia. In 2003, Orbelyan, the first foreigner who does  not have Russian citizenship, was awarded the honorary title of  Honored Artist of Russia. In 2012, he was awarded the Order of  Friendship for his great contribution to the popularization of  Russian culture outside Russia.