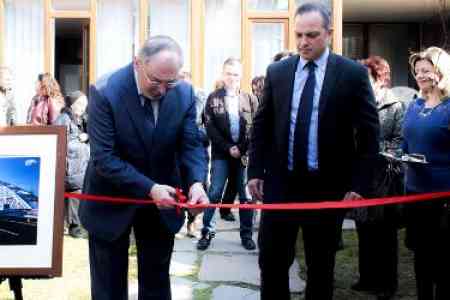 ArmInfo.The opening of the  photo exhibition "Crimean Spring:  5 years in the native harbor" took  place in the Russian Center for Science and Culture (RCSC) in  Yerevan.

The press service of the RCSC told ArmInfo that the exhibition is  devoted to the events of the "Crimean Spring", the historical moments  of 2014.

Opening the exhibition, Director of the Russian Center for Science  and Culture in Yerevan Sergey Rybinsky  referring to the events of  2014, made a brief historical excursion, emphasizing the support of  ordinary people to the people of Crimea.

The exposition of the photo exhibition reveals not only the events of  the "Crimean Spring", but also the grandiose changes that have  occurred over the past 5 years after the Crimea was incorporated into  the Russian Federation.

After the grand opening of the exhibition, Tigran Keosayan's "Crimean  Bridge. Made with love!" film was premiered.

Leaders and members of public organizations of Russian compatriots,  representatives of youth organizations, the media and the public  attended the event.  The event was organized by the RCSC in Yerevan  together with the Armenian "Club of Friends of Crimea" and the State  Autonomous Institution "Business and Cultural Center of the Republic  of Crimea" with the organizational support of the public organization  "Regional Association of Scientific and Educational Centers."