Vanetsyan: Realizing the programs for settling the southern regions  of Artsakh, we send a message the world about the impossibility of  territorial concessions 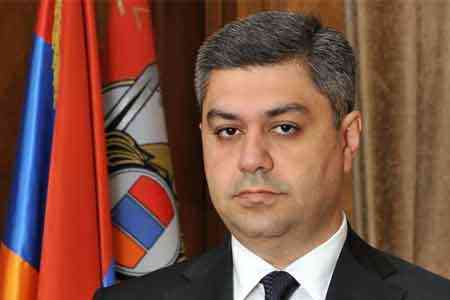 ArmInfo. Statements about the  possible surrender of territories to Azerbaijan are speculations.  Head of the National Security Service of Armenia Artur Vanetsyan  stated this during his visit to the southern districts of Artsakh.

During his visit to the southern regions, Vanetsyan discussed with  the top leadership of the republic a program of settling the  territory along the banks of the Araks River. In particular, it is  planned to build the settlement Araksavan, to develop agriculture  here and to create infrastructures. According to Vanetsyan, the  settlement of these territories is one of the main security  guarantees.

In the context of the discussions, Vanetsyan noted that the  implementation of this project is already a refutation of speculation  that negotiations are underway around possible territorial  concessions.  "Implementing this program, we are sending a clear  message to the world that no one will surrender even a single inch of  land. On the contrary, our compatriots should live in our  territories, live and create," Vanetsyan said.